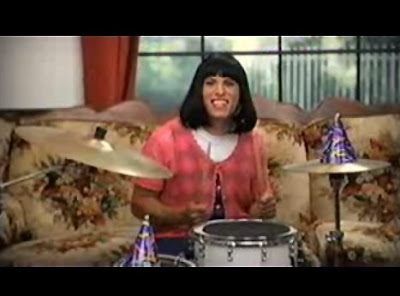 Today's On The Blog Reel features men in drag, men drawn as storybook characters, and men riding through clouds on puppies. Excited yet? First we bring you Pittsburgh pop-punkers Punchline (say that three times fast) and their raucous new video for their hit single, appropriately titled "The Hit." The video follows the band living out their 1990s cliche-sitcom fantasies, starring in their own show, whose opening credits look conspicuously like those of Full House. (The proof is in the font.) While there's no John Stamos as Uncle Jesse, there is bassist Chris Fafalios as Hank the Mechanic. Drummer PJ Caruso, above, moonlights as the chatty sister; a Stephanie Tanner, if you will.

We've also got the new one from Annuals, for "Confessor", which features drawing-versions of the actual band. You know, if they were traveling woods-guides and prison torturers living in a storybook that takes place during an ethereal version of the Spanish Inquisition. Lastly, we've got the most bewildering of all, a clip from today's episode of Yo Gabba Gabba on Nickelodeon featuring emo pioneers Jimmy Eat World. They're performing an original children's song, "Beautiful Day", and they're doing so on the backs of dogs and cats. Honestly, to describe it any further wouldn't do it justice.

Videos after the jump!

Punchline - The Hit from absolutepunk.net on Vimeo.

Dictated but not read by Andrew Daniels at 3:33 PM