I Shall Be Released: Glasvegas + mp3s 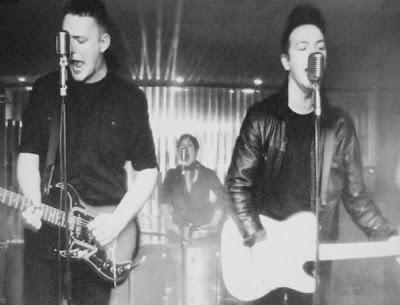 Glasvegas - "It's My Own" - mp3
Glasvegas - "Stabbed" - mp3
This four-piece from Glasgow fits nicely alongside recent Stark artist to watch, Mercy Arms. With beautiful melodies floating atop a shoegaze wall-of-sound, Glasvegas is able to capture a distinctly UK sound that manages to translate across the Atlantic. We're loving this recent resurgence of the Creation Records sound. If you're not familiar, Creation hosted a slew of classic 1980s indie-rock acts including Jesus and Mary Chain, Primal Scream and My Bloody Valentine. In fact, Creation founder Alan McGee, helped Glasvegas rise in popularity by blogging about the band's MySpace demos.

Their self-titled debut comes out next week in Europe and was recorded in NYC by James Allan & Rich Costey (also worked with Franz Ferdinand, Interpol and Muse). Glasvegas received praise from NME by winning the 2008 NME 'Philip Hall Radar Award' for most promising new band.

They have two NYC shows coming up:
Oct. 1 @ Radio City opening for Echo & the Bunnymen
Oct. 4 @ the Mercury Lounge.
(The Merc show is sold out, and tickets for the Echo show run about $75 a pop. Ouch.)

Check out the video for their single "Geraldine"
Band Website

Dictated but not read by StarkNY at 9:00 AM