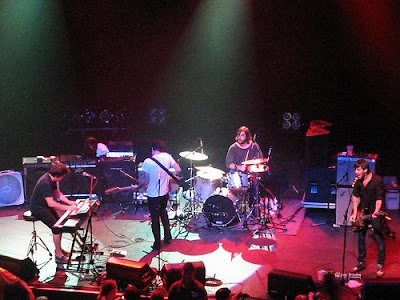 At last night's Terminal 5 show, Wolf Parade proved they're a great band, but best appreciated through a pair of high-quality headphones. Any music fan knows— some bands rule the stage, while others are best left to the realm of solitary consumption.

Truth: we don't go to live shows because we want to hear a simple recitation of the studio recording. We go to live shows because we want our socks rocked off. Last night, my socks, had I been wearing any, weren't going anywhere— this despite the fact that Wolf Parade is one of my favorite bands, and a formidable talent. The problem wasn't that their talent didn't translate to the stage; it did. The problem was that this talent translated to the stage far too neatly, too painstakingly-even, to deliver the kind of show I wanted to see.
More After the Jump

The opener, "You Are a Runner and I Am My Father's Son", was familiarly cacophonous, though slightly muddled by Terminal 5's infamous acoustics, and kicked off a series of songs that perfectly parroted their studio versions. Those relatively unfamiliar with the band probably had a more enjoyable time than those who have fully appreciated the power of a Wolf Parade album. The former fan-group likely came away wanting more…but those who have already digested Apologies to the Queen Mary and At Mount Zoomer came in expecting more, and I suspect they were a bit disappointed.

All in all, the show never seemed to really take off, despite the band's undeniably skillful musicianship. It lacked the smoothness and continuity that gives a great live show power and purpose. The songs seemed randomly chosen and assembled alongside one another. Were they bad? No, but I could just as easily have fueled my love for Wolf Parade wrapped in a blanket beneath a pair of Bose headphones.

Some kids up front, perhaps desperate to inject some passion into things, started moshing and crowd surfing; confused by the incongruity of it all, Spencer Krug got all parent-y on their asses. "Be nice to each other when you're doing 'the mosh'", he pleaded. "That song wasn't even very fast." No, it wasn't. But when the fans start moshing and crowd surfing during a song like "Fine Young Cannibals", maybe that's a cue to, I don't know, smash your guitar or something.

Dictated but not read by StarkNY at 2:30 PM