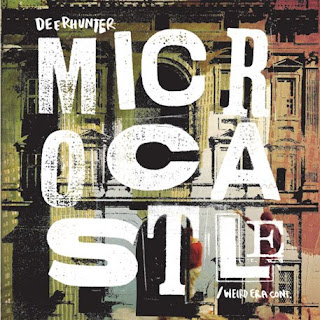 Deerhunter "Game of Diamonds" mp3
So we had a nice release week this week with the Walkmen, Lykke Li, Byrne/Eno, and the new Deerhunter (which is awesome) to name a few. Here are a few other things from the past, present, and future that y'all might enjoy. A few Stark editors are moving this week, so things are a bit slow. 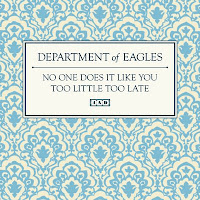 Department of Eagles
Department of Eagles "No One Else Does it Like You" - mp3
Although this band seems to have been fiddling with things for awhile now (I began reading about them over a year ago) the project seems to finally come to fruition as the LP In Ear Park is set for release on October 7th. Recorded by Grizzly Bear's Chris Taylor - this is definitely one to check out.

Ezra Furman and the Harpoons
MYSPACE
Ezra and co. (and all of us) are waiting for their new record Inside the Human Body (Minty Fresh) to drop, but they have been throwing new tunes up on their myspace for the past few weeks. Highly suggest heading over there and checking out a few. Keep your eye out for Stark's interview with Ezra coming up soon.

Bark Hide and Horn
Bark Hide and Horn "This Abdomen has Flown" mp3
New on the indie/americana/folk/rock etc scene, this Portland based group just released their new record National Road. It's fresh sounding and pushes the limits of what can be a pretty stale genre these days. Strangely enough it's a concept record based on the life former National Geographic editor Melville Bell Grosvenor conveyed through his photos during his tenure at the magazine. Yeah, it's worth checking out.

Modern Lovers
I don't know how I've missed this album in all of my years of listening. In an email exchange, contributing writer Mike Bailey put it best "The Modern Lovers one and only CD is a must own - incredible. In my opinion, it's the only CD you need from Jonathan Richmon. I think his solo stuff blows." It's super cheap at the Amazon mp3 store. Get it now.
Dictated but not read by StarkNY at 3:09 PM