Saturday at All Points West 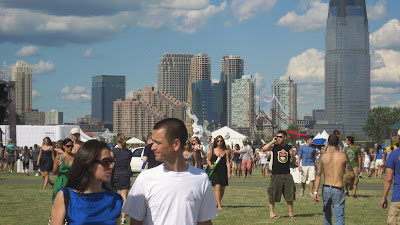 This past weekend marked the inaugural All Points West festival at Liberty State Park in Jersey City, NJ. Originally intended to be the "Coachella of the East" when the event was first rumored earlier this year, Goldenvoice/AEG instead delivered a less-than-stellar lineup when the performers were announced. The bill read like two Radiohead shows and one Jack Johnson show, with a bunch of indie acts ranging from notable to "who?" in the support slots. However, that didn't stop thousands upon thousands from entering the park via the Light Rail (more on transportation later) over three days; after all, it's Radiohead. It was the band's first festival appearance in the Tri-State area in what seemed like years. I was on hand for Saturday's edition, and needless to say, they didn't disappoint. But how did the other bands fare? And what about the festival as a whole?

Much has already been made of the fact that there was no parking allowed on premises; if you wanted to get into the festival, you had to arrive to the grounds either by ferry from Manhattan ($30) or by the Light Rail system in Jersey City ($3.80 round trip.) We chose the latter. 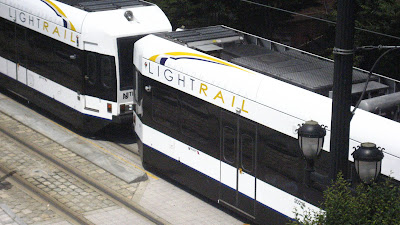 When all was said and done, it took us approximately one hour to take the train through three stops to the Liberty Science Center and walk a mile to the festival. That's okay. It prepared us for the day ahead of being on my feet for 12 hours straight, and it provided for some gorgeous scenery: 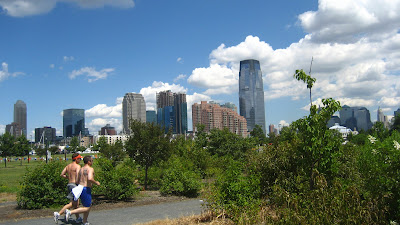 We finally made it into the park by a little after 1 p.m., fresh in time to catch Your Vegas on the smallest stage, Queen Of The Valley. The Leeds five-piece was energized to be playing one of their first American festivals, even if an audience almost non-existent, as most of the day's crowd had yet to shuffle in or was checking out the rest of the festival's digs. The band was pleasant enough, if not a bit too conscious of adhering to the rock star handbook. Lead singer Coyle Girelli sounded like a mix between Dave Gahan and Stephen Christian of Anberlin, and the rest of the band employed U2 theatrics to get the set moving. 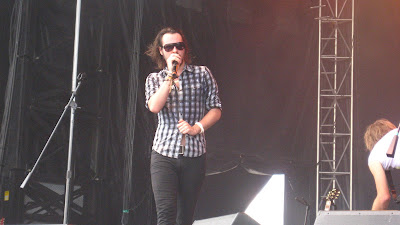 We proceeded to move to the Bullet stage to check out Sweden-by-way-of-New York blues band Alberta Cross. Really, really dug them. Slow moving country rock that's vintage Neil Young. Nearly every song prominently featured the Hammond, and that's never a bad thing. I believe they've either already completed an upcoming full length on Ark Recordings, or are very close to it. Look for that one. 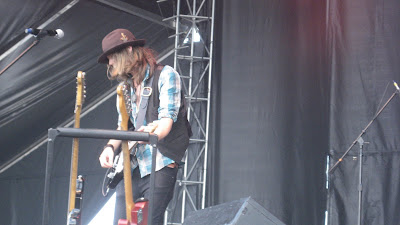 Chromeo, Chromeo, wherefore art thou Chromeo? We ventured to the main stage, Blue Comet, to check out the party boys from NYC deliver the day's most entertaining set. Playing tracks culled mostly from last year's Fancy Footwork, the duo charmed the audience (many of which had begun to stake their place in the crowd for Radiohead, who wouldn't go on for another six hours.) Lead singer Dave 1 -- professor of French at Columbia -- charmed with his goofy white boy/Jew shtick, while sidekick P-Thugg absolutely slayed on the vocoder. The crowd was eating up everything Chromeo had to serve, myself included. The highlight had to be their take on "Momma's Boy", a standout from Fancy with a killer synth line right out of Elton John's "Crocodile Rock." Check out the track's brand new video here. 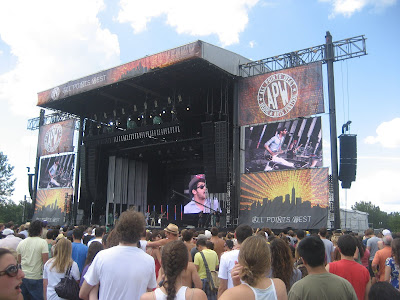 Emily Haines and Metric took the main stage after Chromeo, and we caught a few songs, but The Felice Brothers were playing the Bullet stage at the same time, and I had been dying to see them. It was the definitely the right choice; this band will slowly but surely take the country by storm. Their rustic brand of Americana is infectious, and their performance felt like being in an old barn drunk on moonshine. The three brothers from Upstate NY - Ian, Simone, and James Felice - all traded off on lead vocals. Ian's gruffy voice is a dead ringer for Dylan's, while Simone and James have slightly more polish. They were joined by a bass player who only goes by the name of "Christmas", and a washboard player/fiddler named Farley. They played songs from their excellent self-titled Team Love record from earlier this year, and very nearly stole the day from Radiohead. But that, as Liberty State Park would find later that night... was an impossible task. 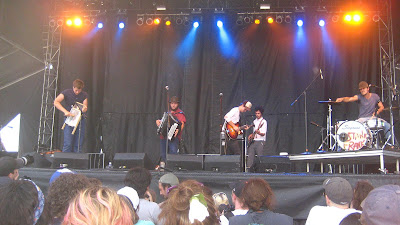 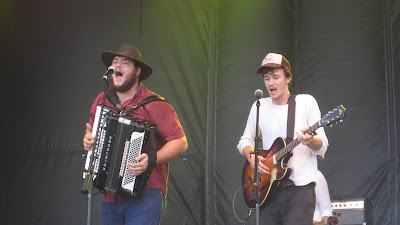 There was an hour to kill in between The Felice Brothers and Animal Collective, so we spent it walking the grounds to take in the full experience. Since APW was billed as a festival for music and the arts, there were various exhibits and tents on site highlighting work from both well-known and novice artists. My favorite structure? 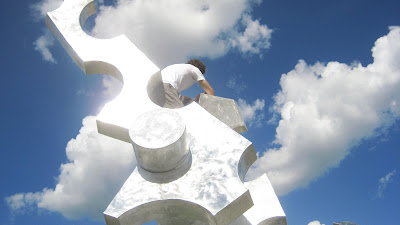 Around 5:00, we mosied back over to Blue Comet to check out Animal Collective. Awe-inspiring? Hardly. I may be in the small minority of those who find the noise-rock outfit more noise than rock, largely devoid of melody. I can roll with these guys for about ten minutes until it becomes tedious. I'm not calling them over-rated, but I just don't see the appeal. However, there were definitely parts of the set that moved me, particularly the closing "Brother Sport", which I connected to immediately. Or maybe it was because I knew the end was approaching. Don't kill me, Panda Bear! 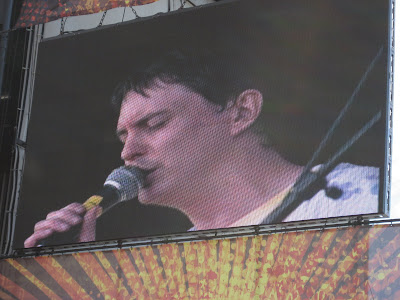 Our party split up after Animal Collective was finished and The Roots were prepping to take the Bullet stage. Although it pained me to miss the Philly hip hop pioneers, they were playing at the same time as Kings Of Leon on the main stage. My brother and I stayed back to catch the Followill brothers' set and hold down a spot for Radiohead, while the others ventured off for The Roots. From what I heard, they delivered a furious, largely improvisational set, complete with tuba solos. However, I did catch a glimpse of drummer Ahmir "?uestlove" Thompson while signing autographs in the Virgin tent. Check it: 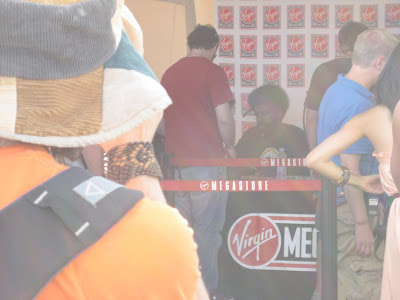 Anyway, onto the Kings. They ripped. What a great festival band in this atmosphere: perfect for delivering crowd pleasing rockers, expert musicianship, great Southern hospitality. At this point, the audience at the Blue Comet stage was rapidly increasing by the thousands, and songs from Aha Shake Heartbreak and Because of the Times served as the catalysts to mass sing-a-longs. One of my favorite moments of the day occurred when lead singer Caleb Followill, master of the creaky and wavering voice, let the audience emulate him during "Fans." The band also debuted a new song from their upcoming Only by the Night called "Sex On Fire" -- streaming now on Myspace -- and that's what their set felt like. Sex on fire. Props to MVP drummer Nathan, who never let up for the set's hour-plus duration. 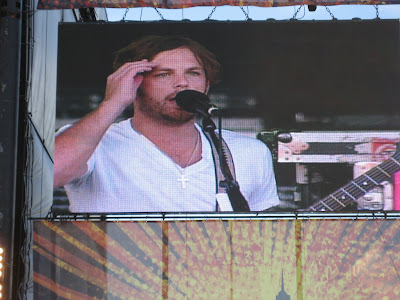 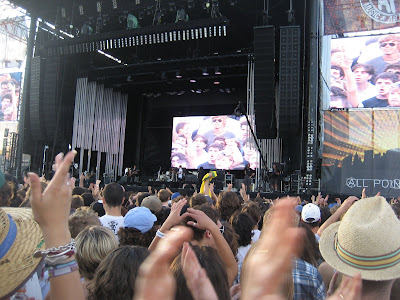 And so the anticipation began. It's been more than a decade of fully appreciating Radiohead's music that I've waited to see the band, and the 45 minutes we spent packed like sardines in a tin can (sorry, I couldn't resist) amidst a hot, sweaty and tall crowd was the equivalent of an eternity. Plus, the overwhelming smell of marijuana from every direction certainly didn't help. It grew darker, and the band's stage set up was unveiled: a 3D curtain of long vertical glass strips. An amazing sight to be seen when unlit, and even more jaw-dropping when in use. Finally, as everyone in the audience collectively looked at their watches when the time reached 8:30, and subsequently back at the stage, everything went black: The moment had arrived. Drummer Phil Selway began playing the groove to "Reckoner", and guitarist Ed O'Brien complemented him on tambourine, steadily crescendoing until the rest of the band came in. They were spot-on, effortlessly locked in with each other while Thom Yorke's ethereal falsetto on the song's chorus took center stage. It was an unbelievable way to open, and they retained that energy for the rest of the night. The song selection felt perfect; In Rainbows was scattered in its entirety, and every album with the exception of Pablo Honey was represented within the confines of two hours. It's hard to pick a highlight when every song sent shivers down my spine, but their pulsating take on "The National Anthem" and the so-quiet-you-could-hear-a-pin-drop subtlety of "Exit Music (For A Film)" were standouts. Seriously, there's something magical when an entire park of 30,000 people goes completely silent. Stunning. Complete set list, courtesy of Stereogum:

01 "Reckoner"
02 "15 Step"
03 "The National Anthem"
04 "Kid A"
05 "All I Need"
06 "Nude"
07 "Weird Fishes"/"Arpeggi"
08 "Where I End And You Begin"
09 "The Gloaming"
10 "Faust Arp"
11 "No Surprises"
12 "Jigsaw Falling Into Place"
13 "The Bends"
14 "Bangers & Mash"
15 "Everything In Its Right Place"
16 "Exit Music (For A Film)"
17 "Bodysnatchers"
----
18 "Pyramid Song"
19 "Videotape"
20 "Airbag"
21 "Fake Plastic Trees"
22 "There There"
----
23 "House Of Cards"
24 "Planet Telex"
25 "Idioteque"
By all blog accounts, the band's performance on Saturday overwhelmingly topped a still-incredible Friday show, and I'm glad I got to witness it. Simply seeing Radiohead made up for everything: lackluster line-up (spring for bigger bands next year, Goldenvoice), transportation frustrations (getting out of the festival via Light Rail was an ABSOLUTE NIGHTMARE) and claustrophobic conditions. However, because of five guys from Oxford -- is it really a stretch to call them the greatest band in the world? -- the debut of All Points West was a success. Thanks for making my life, Radiohead. 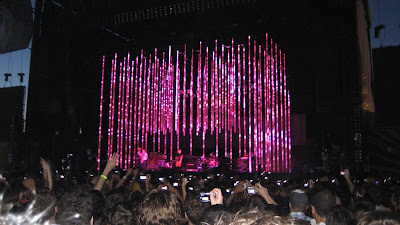 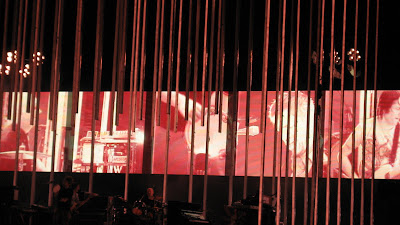 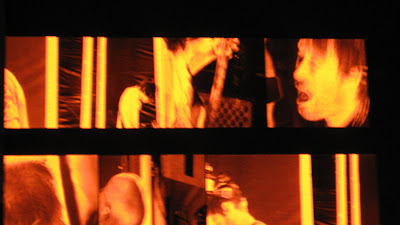 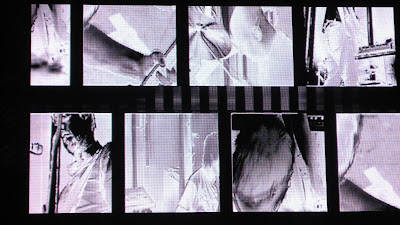 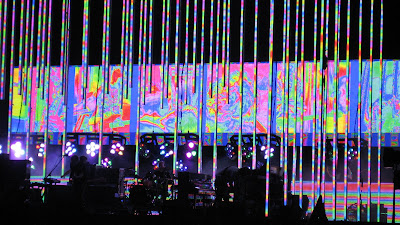 Dictated but not read by Andrew Daniels at 9:59 AM