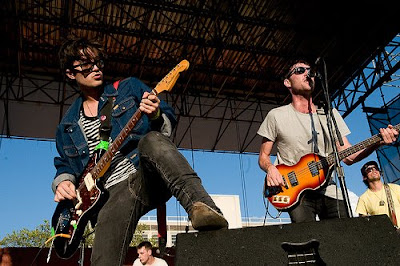 Photo Credit: Ryan Muir
Yes, Stark was there too. McCarren Pool: the mecca of all things edgy, "hipster," in style, out of style - pick your modifier. Nursing our King Khan hangovers from Mercury the night before, Stark had a beer and enjoyed the beautiful weather. Khan took the stage shortly after we arrived - honestly, we were all Khan'd out. McCarren's extreme bouts of sensory overload were enough entertainment for us. We were happy people watching for a large portion of the day. 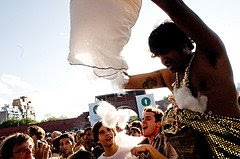 Taking a break from ogling our surroundings, we enjoyed Deerhunter's sweeping melodies accentuated by the echoes of the pool walls. We found Deerhunter's set to be pleasant background noise for our second round of drinks. Stark has never been huge Deerhunter fans per se, but their set was definitely a pleasant surprise.

Sadly however, we missed out on the $2 VIP beers and the free Dewar's which proved our only regret Sunday. 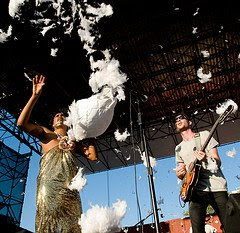 As the weather began to cool, we made our way into the crowd to rub elbows during the Black Lips performance. Again, sensory overload stuck us. It was hard to concentrate on the music of Black Lips when you have Khan running half-naked around the stage throwing toilet paper and pillow lining into the crowd. Band groupies positioned at stage right quickly followed suit, throwing heaping amounts of toilet tissue into the crowd as well. The Black Lips proved that they were truly a part of the In the Red Records family with a sound so very reminiscent to fellow label-mates Jay Reatard, Cheap Time and the like. Yet, they managed to cut through all that delivering a surprisingly cohesive set. Despite all the on-stage craziness, they proved to be a band that writes great songs, and cares about the music a lot more than their stage show would insinuate. 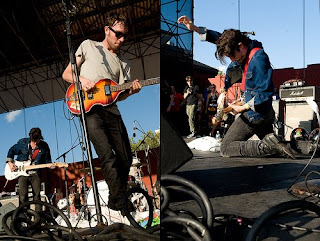 Being relatively new to the pool scene, we had to give it to Jelly NYC and the entire pool party ensemble for creating an environment so free of rules, yet so orderly and controlled. As one of our Brit friends was quick to point out - if this were in London, there would've been fights five minutes into the performances. We surmised that's why the scene here has become so popular - drawing the attention of the nation and even the arts cover of the NY Times. 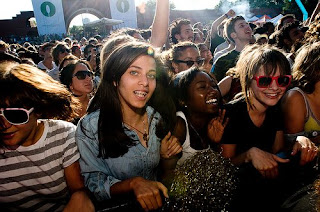 Beautiful weather. Beautiful people (give or take) and a fantastic venue.

Dictated but not read by thestarkonline at 2:09 PM