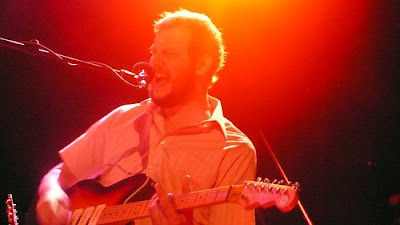 There are some artists you're afraid to see live. Their records are so good, or mean so much that you're afraid to pull the curtain away lest you reveal some imposter, some phony impersonating the artist you once held in such high esteem. Sometimes the magic of recording can be stripped away instantly as you see the exposed cogs and gears of how a once mysterious record came to be. Such were my fears last night walking into the MHOW to see Bon Iver.

Much has been made of Iver's almost mythical journey to a cabin in the woods to record his debut record, For Emma: Forever Ago. The recording itself has a soft mystery to it providing a intimate look at an artist stripped bare before the listener. You don't want to know the man behind these songs. You don't want to find out that he watches regular TV shows and mingles amongst us common folk. He should forever remain that faceless figure in a cabin living amongst the snow and pines singing of loss, heartbreak, and love. Of course, this cannot be the case. 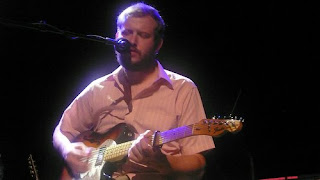 Bon Iver is indeed a real person, Justin Vernon to be exact. At the MHOW last night, he exuded elements of a humble, grateful, modest and extremely talented songwriter and performer. He and his band played through every song on Forever Ago, with force, passion, and delicacy. Vernon introduced us to an excellent new tune as well.

Inside the powerfully-quiet falsetto of Vernon, lies an inner rock star. Backed by his ace band, the group developed each song and even jammed a few times amidst ambient guitar noise and Tweedy-esque guitar solos. Vernon spent most of the night on electric guitar (that's right) and used precise control of tempo, dynamics, and volume to create an even flow to the set.

Ultimately, it wasn't about the details last night, but rather it was about the overall package of an artist destined for greatness. The crowd at MHOW was one of, if not the most enthusiastic NYC crowds I have ever seen. The foot-stamping ovation before the encore and the group sing-along during closer "Skinny Love" was nothing short of astounding. Vernon was truly humbled and taken aback by the love showed to him as he left the stage, apologizing for not knowing any more songs. The gratitude showed Vernon was well deserved as he had treated the audience to a special night; from the pin drop silence of "Stacks" to the driving force of "For Emma:" his focus was immaculate and his execution flawless. Justin Vernon wasn't the performer I had expected though. He was better. Each song had depth and passion, and if the new song is a forbearer of his next record, Vernon will continue to develop into a true star.

Dictated but not read by StarkNY at 10:28 AM