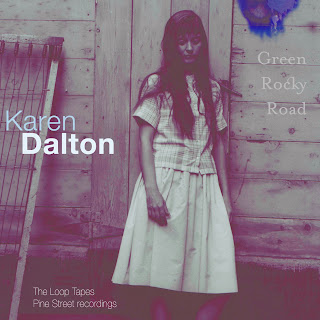 Karen Dalton - "Katie Cruel" mp3
Green Rocky Road, the latest release from the Karen Dalton catalog, captures the underrated and oft-forgotten folk singer in her most relaxed and surprisingly most accessible form. Whereas her seminal studio albums, most notably In My Own Time, feature Dalton with full backing band and contain some of her best work, they often come across as highly deliberate efforts (by others) to establish Dalton as part of the burgeoning folk-revival scene of the mid to late 1960s. Green Rocky Road features Dalton, circa 1962-63, at home (literally and figuratively) with just her banjo or 12 string playing folk music, not for reasons of preservation or commercial success, but to just to play the songs she loved in whatever form she felt like playing them. What resulted is a record filled with passionate renderings of folk songs interpreted and revised in the true folk tradition of Leadbelly and Blind Willie McTell, rather than the more commercial interpretations by her peers.
Video & more after the jump...

On Green Rocky Road, Dalton captures the true timelessness of uniquely American folk music. Most produced folk records of the 1960s (including Dalton's) can be clearly pin-pointed to that era. Whether it be the clear overtones of the anti-war movement or the force of communism on American culture, most folk records of the time sound dated or at least a product of their time. Green Rocky Road could have been recorded anywhere at any time. Does that make it better than the classic 1960s folk albums produced by Dylan, Seeger or Van Ronk? Debatable. Yet, in a genre obsessed with authenticity and preserving the "true folk traditions" Dalton clearly shows herself as a singer devoid of time and popular influences. What results is a record of back porch folk music that current revivalists and traditionalists will turn to as an authentic piece of true American folk music and an important link between the folk icons of the distant past and the more popular images of folk musicians of the mid to late 60s.
Dictated but not read by StarkNY at 7:24 AM