Dying To Be A Mars Volta Chick 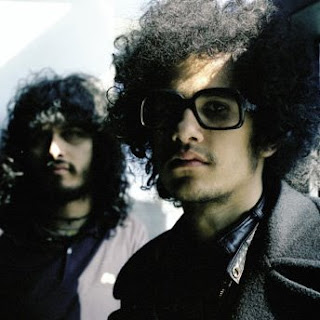 Let me preface my thoughts on this newest Volta installment by saying that I have an unhealthy relationship with this band. I’ll be honest—I’m sort of dying to be the kind of chick that digs The Mars Volta. I’ve always wanted to be able to say to a rabid fan in a bar: “Yeah, around 4:35 on "Drunkship of Lanterns" is totally the height of rock and roll.” My first foray was a totally blind purchase of Frances the Mute, which I bought on recommendation from a friend. I listened paralyzed by sensory overload until I got to "The Widow", a completely non-sequitorial, suspiciously accessible classic rock jam. “I can dig this,” I thought, until I realized that, were I an actual Volta fan, this song would make me want to drive off a cliff, (after burning the album, of course)... My experiences after Frances have been similarly confusing. I consume Volta albums as quickly as possible, hoping if I get them all down at once, I can somehow trick my gag reflex. Unfortunately, it’s usually just a binge followed by inevitable regurgitation. Needless to say, when I listened to their newest, Bedlam in Goliath, I didn’t have high hopes, especially after hearing Cedric and Omar (I’ll pretend I’m on a first-name basis) interviewed about the concepts behind Bedlam. Inspired by Ouija boards? Yup, there’s the gag reflex, right on cue.
Imagine my surprise when, against all odds, I kind of enjoyed this album. Haters take note: it’s not all that different than the others. Just as volatile, just as indulgent, just as weird. I was still left wondering if they were simply trying to trick us into believing they’re prog. But I felt that some of the bass lines actually followed a more natural progression on this album, the songs were more gritty, less straight-up crazy. More head-nod, less insane psychotic mosh pit. Listen to Aberinkula, Metatron, and Wax Simulacra, for starters. I don’t know…maybe I’m coming around.

- Tara McCarthy, Contributing Writer to Stark
Dictated but not read by StarkNY at 10:37 AM

Despite the fact that the mars volta are 'sensory overload'...tell me tara...who rocks harder nowadays?