Blogging Through The Red Album 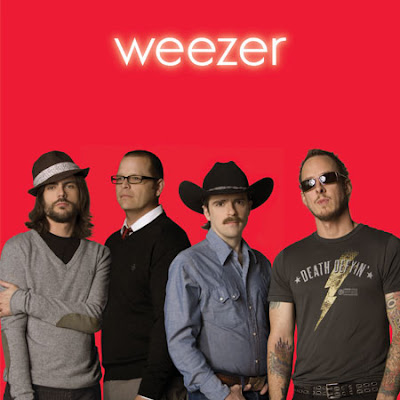 Regardless of how much they disappoint me with each year that passes, I am – and will forever be – a die-hard Weezer fan. I can't help it. That band is a part of me until I die. The Blue Album was the first piece of music I ever bought for myself, back in 1994, at the now-defunct Sound and Vision in the Westgate Mall. Pinkerton ranks among my top five albums of all time, and its lyrics are ingrained in my bedroom walls. The three subsequent Weezer albums, post-hiatus – Green, Maladroit and Make Believe – were largely panned -- but I instead point to the redeeming qualities on all three. I think, on a good day, Rivers Cuomo is arguably the best pop songwriter of his generation, so I always hold out hope that his next work could return him to the glory days of Blue and Pink.

Today marks the release of Weezer's first album in three years, for the third time self-titled, affectionately given the hue nickname of Red. The album has leaked in bits and pieces over the last month and a half, but I resisted the urge to download. Instead, I opted to wait until today to digest the whole thing with virgin ears, as I do each release day for the bands that are important to me. I've steered clear of early criticisms and praises on message boards, so that my opinion may not be hindered by jaded fans and critics. I mean business.

Anyway, you know about my anticipation. I was the one who fawned over a twenty-second snippet of "Pork and Beans", and up until now, the single was my only taste of Red. This morning, I eagerly got into the car to drive to my mom-and-pop store of choice, the Compact Disc Center, and picked up the album for a cool $12.99. What follows are my first impressions of the album, and the thoughts I had during my first listen, unfolded in real time. Preconceived notions be damned, this is The Red Album. Follow along!

- The guitar riff that kicks off the album is reminiscent of "The Good Life". That's certainly a good start.

- Love the bridge. Lyrics about sex and fame, something the 'Varz hasn't addressed in this candor since Pinkerton.

- Kind of a weak chorus, but the rest of the song makes up for it.

"The Greatest Man That Ever Lived (Variations on a Shaker Hymn)"

- Sirens, applause, and piano tinkling that sounds like a Fisher Price commercial.

- Rivers is rapping about underwear. This is awkward.

- This song has already veered in four different directions. Bizarre.

- Straight up Blue melody at the 3:30 mark, complete with awesome moog.

- Dramatic spoken word from RC: "bodies be all up on my behind."

- I know he's a fan of Green Day, but maybe Rivers listened to a little too much of American Idiot while writing this.

- All over the place. Utterly ridiculous, and that's both good and bad.

- Thrilled they're using this guitar tone again. I really, really love this single. The video's great too.

- Now I can't help but picture the Shoes guy during the last "I don't care!" in the bridge. Damn you.
- Has anyone figured out what that chicken sound is yet?

- Sleigh bells in the background! Opening sorta reminds me of "My Name Is Jonas" and "In The Garage."

- You know, it's totally normal to sing about the Fresh Prince.

- I dig how refreshingly honest Rivers is, particularly with the third verse, about Weezer's beginning.

- Finally, dude belts out after all that restraint. And there's our first hint of a guitar solo on the whole record, even if it's not much.

- Definitely got better at the end.

- This song actually starts with this phrase: "When I was younger, I used to go and tip cows upon ya. Actually, I didn't do that, because I didn't want the cows to be sad." Ugh.

- So far, this is a bad Maladroit outtake. Rick Rubin should never be allowed to produce anything Weezer ever again.

- Okay, this section is pretty sweet, and it kinda redeems the first part of the song. Rivers is contemplating fatherhood, and whether or not he would allow his kids to do the same things he did when he was younger. Good harmonies. The 'ninja swords' line, though awful, works well in the context.

- Another song coping with being an adult and a father. It's the album's unifying theme so far.

- What the hell is this midsection? Brian just uttered the word "goslings."

- Alright, it's getting better. Again, Brian is all over this album… love the interplay between the two vocals.

- Another ambitious suite, combining parts of Blue and the best parts of Make Believe. I'm not sure if it all works, but man, this band is certainly experimenting.

- Brian takes center stage for the song. His voice is snotty, and is probably better suited for backups.

- I'm coming around to the chorus. If I have to deal with Rivers not singing, I suppose this will do.

- Song is pleasant, but nothing exceptional. It doesn't really go anywhere, and it kind of reminds me of a latter-day Santana song, with a guest vocal by Brian Bell. I'm worried to hear Scott's and Pat's songs...

- The opening verse might confirm by darkest fears: that Scott Shriner would some day ruin this band.

- His voice isn't really anything. There's no variation in the melody, and it sounds like a bad Red Hot Chili Peppers rap.

- Chorus is slightly better, but this song should've been a B-side.

- Rivers takes over for the rest of the song, but it doesn't change a thing.

- This is probably the first song I have to skip on the album. It's that bad.

- Pat has a pretty quirky voice, but he's definitely a better drummer than he is a singer.

- I actually dig this, sort of a lot. It's really rough and minimal. Wouldn't sound out of place on Maladroit, and I like the buzzsaw guitars throughout.

- I imagine what this would've sounded like had Rivers sung it, but you know what? This probably suits Pat's voice better than it does Rivers's.

- Definitely the best of the three non-RC songs. I can roll with this.

"The Angel and The One"

- I have a feeling this is going to be epic – and not in the sense of "The Greatest Man", but more in the vein of Blue's closer, "Only In Dreams."

- This has a real Midwestern emo feel to it. The guitar works perfectly.

- Rivers hasn't used this much emotion in more than ten years. Mark it. When his voice reaches that plateau at 2:40… best moment on the album.

- This is giving me chills, seriously.

- This would've been perfect to end Make Believe… a lot of the same subject matter. It doesn't work well contextually on this album, but it's arguably the best song on here when it stands alone.

And there you have it. It's going to take many more listens to give any sort of comprehensive, final opinion on the album. I loved a lot of things, I hated others. My premature evaluation? There are some real winners on here, and some real clunkers -- thus, it's not a return to form, but it's a hell of a start. The album is at times fun, poignant, experimental and really scattered, but I think it beats the hell out of the last three albums from this decade. The band's development on Red is really encouraging for Album Seven, which has already been given the tentative release date of November 2009. Maybe -- just maybe -- having colossal expectations for the next Weezer album are now justified, thanks to the progress they made with this one.

The Red Album is available everywhere today. If you have the album, what do you think?
Dictated but not read by StarkNY at 5:18 PM