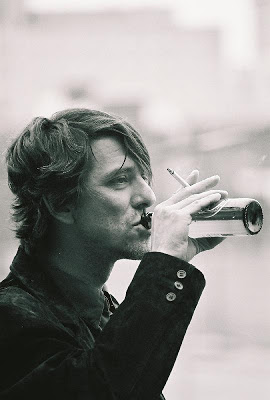 It was pretty apparent to Vince and I a few weeks back, that seeing a Mike Cooley solo live show was pretty much as close to seeing a live Townes van Zandt show as we would every get. Present was, the dry wit, small room of devoted fans, tastefully imperfect fingerpicking, whiskey sipping, and the songs that make Cooley (in our estimation) one of the greatest living American songwriters. Steve Earle once famously quipped: "Townes van Zandt is the best songwriter in the whole world and I'll stand on Bob Dylan's coffee table in my cowboy boots and say that." Well, Cooley may not be there yet, but let's just say I may have a date with some boots and Mr. Earle's coffee table. (Nothin' but love though Steve.) "The Fool on Every Corner (Dec 11th) was recorded by longtime Drive-By Truckers’ producer David Barbe during a three-show run last March, beginning with a two-night stand at no-frills Atlanta rock club The Earl and closing at The Melting Point in Athens, GA."

Dictated but not read by Starkny at 11:14 AM

Email ThisBlogThis!Share to TwitterShare to FacebookShare to Pinterest
Labels: Mike Cooley, The Fool on Every Corner, Townes Van Zandt