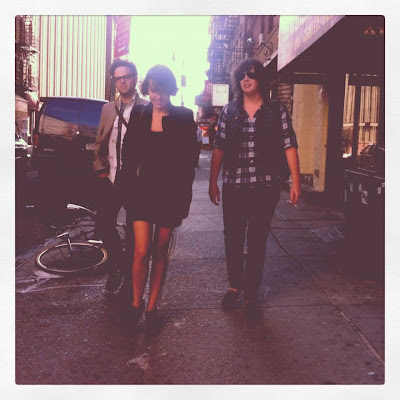 Tristen ["Baby Drugs"]: To be honest, we thought we had a fairly good idea of what we were going to get when we went to see Tristen play twice last week. We've seen a lot of Tristen shows, but were not ready for the next level of musicianship and songwriting that Tristen and her band The Ringers brought, especially at the Flower Booking showcase Friday. With new drummer Sam Smith, and classic Ringers, Buddy and Jordan - Tristen pulled out three new songs from the follow up to Charlatans at the Garden Gate (out now - American Myth) - and brought her more familiar material to new heights. Guitarless, Tristen dominated the stage during closing song "No One's Gonna Know." It was rhythmic, pulsing, melodic, - dare we say anthemic - and outright spectacular. New record, new haircut - and we can't wait to hear it.

FIDLAR ["Bummed"]: Fuck it dog, life's a risk. Fidlar may have been the top live band we saw all week. Their set was ear splittingly loud, the songs short, powerful and gripping. On the surface, they're four stoner skater punks from LA - but the writing is scary good, and the execution is better. Their drummer summed the band up best in a brief conversation before their set: "I can guarantee you that at no point during our set will I play a stand alone floor tom at the front of the stage with a maraca." Amen.

Alabama Shakes ["I Found You"]: Clearly, this band went into CMJ with huge amounts of momentum. With Jack White already a fan, and labels rumored to be bidding heavily on these amazing Alabama newcomers - there's no question they were the talk of New York before CMJ. Yet, after their set in Philly the night before, and their Thursday night set (with the amazing Dry The River) - there was no doubt that the Alabama Shakes were the real deal, and are here to stay. People were floored. It's going to be very fun watching them over the next year.

Electric Guest [mp3]: It seemed that it took all the way up until CMJ week for the buzz to hit on Electric Guest, but it reached a crescendo on Tuesday night at the 'anyone who is anyone was there' All Things Go party. With Ezra Koening, Julian Casablancas and Dangermouse (producing their 2012 Downtown album) in attendance, the anticipation was palpable. Yet, for us at least, the set didn't really deliver. The band clearly had some fantastic songs, and the execution was flawless, but there was something intangible that didn't connect with us. There were a few too many downtempo R&B tinged tunes and an off-putting stage presence from a few members. NOW. This is a band with a ton of promise. 2012 is probably going to be a big year for them, and CMJ was a great launching pad. This set may not have connected with us this time - but there will be many more sets, and this is certainly a band you'll be hearing a lot about. We hope to see them again soon.

You Won't ["Who Knew"]: Taking nothing away from this very talented duo, there's not a ton to say about them. You Won't come from the classic school of writing good songs and just getting out there and playing them well. Vocalist Josh Arnoudse has a guttural and dynamic vocal prowess, akin to Deer Tick at his best and as powerful as any indie rock singer out there right now. There's a lot to love here and as they clean up their live show, these guys have a good shot of turning a lot of heads in 2012. Their album Skeptic Goodbye is out now.

Robert Ellis ["Good Intentions"]: We finish this list with a core Texas-based Stark artist. Falling on the more serious side of Jonny Corndawg, and on the more bluegrass side of the usual Texas/Nashville sound - Ellis is a strong contender for the crown in the new crop of country artists plying their craft these days. With long hair and a clean (when it needs to be) vocal tone - Ellis is a dynamic performer and a talented writer. His debut album Photographs is out now on New West. Highly recommended.

Dictated but not read by Starkny at 8:12 AM