Out on the Open West 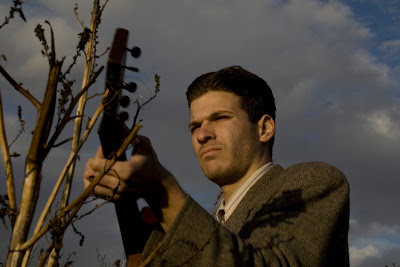 Frank Fairfield's music is sparse and open; recorded seemingly with just a single mic in front of where the man weaves his timeless Appalachian-style banjo or fiddle driven tunes and melodies. Fairfield has gained acclaim in some indie circles due to his touring relationship with Fleet Foxes. But, while that fact may have gained him a few more eyes and ears, his work stands on its own as a true documentation of past styles viewed through a modern lens. The melodies and moods on his excellent new album Out on the Open West are expansive and compelling, making it a strong dark horse contender for one of our top albums of the year.
Dictated but not read by Starkny at 7:04 AM

Email ThisBlogThis!Share to TwitterShare to FacebookShare to Pinterest
Labels: Frank Fairfield, Out on the Open West