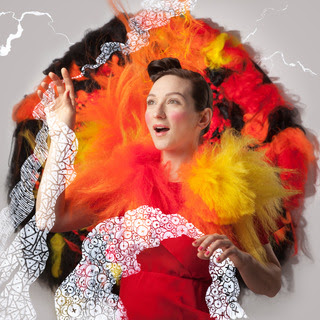 [mp3] My Brightest Diamond: "Reaching Through to the Other Side"
Very exciting news. While it's hard to say something negative about such a talented artist, Shara Worden's work since her startling debut, has been consistent only in its inconsistencies. From her second record to numerous high-end and fantastic collaborations, Worden's career path seemed a little unfocused, and her own work questionable at times. Yet, Worden has proven a true experimenter and artist - which is more than we can ask out of musicians most days. Here's to hoping her new album lives up to, at least our own, lofty expectations. Press release:

In the new My Brightest Diamond chamber pop album entitled, All Things Will Unwind (due October 18 on Asthmatic Kitty), Shara Worden sings from her Detroit homestead about class differences, the complexity of the atom, the beginning & end of time, and the experience of becoming a mother. Composed exclusively for the chamber ensemble yMusic (who you may have seen with Bon Iver, Antony & the Johnsons, The New York Philharmonic & Rufus Wainwright), My Brightest Diamond reaches into a wide range of influences including Roberta Flack, Edith Piaf and Tom Waits. Collaborating with visual artist Shoplifter (MOMA, Bjork, Nico Muhly), the album art captures Worden celebrating neutrinos flying from the sun.

Dictated but not read by Starkny at 6:28 AM