Featured Release: We can Take Care of Ourselves 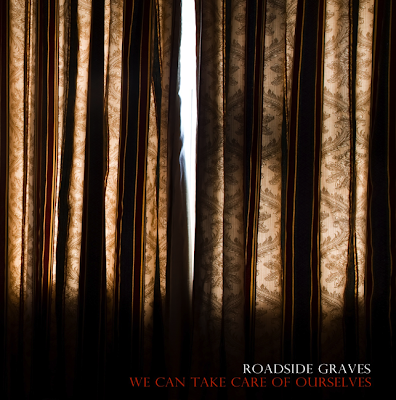 We were careful to not retell the plot [of The Outsiders] in song as bad broadway; rather we focused on making more nuanced allusions to characters, themes, feelings, and settings. We tried to emphasize the sensitive, frightened sides of the characters, instead of showcasing their thick skin and greaser toughness. Musically and sonically, we avoided a retro sound and kept it thick and modern, with only occasional glimpses of melodies and tones that might have pumped out of their radios at night.

The common gripe among critics of bands that fall under the of the golf-umbrella sized genre of "Americana" is that their music is often stale - rehashing the same old themes, sounds, clothes and attitudes. In many ways, we haven't come very far from what Uncle Tupelo and the Old 97s refined - or what Gram Parsons and Beggars Banquet-era Rolling Stones pioneered.

Perhaps what makes The Roadside Graves' new release We Can Take Care of Ourselves (July 19, Autumn Tone) so admirable, transcends the music they play and lies in the core idea of the album and the concept behind the band. Since the first time we saw them, the Graves were a bunch of disparate musicians who looked like they had no business all being on the same stage together. From there, they carefully honed their varied influences into the sound we get on We Can Take Care of Ourselves.

All intermingled between the narrative snippets and plot lines of The Outsiders lies shades of progressive rock, traditional alt-country, straight ahead vintage rock, and hard-lined pop-melodies. In terms of pure window-rolled-down blasting country-rock earworms - this may not be the most accessible Roadside Graves album - but godamned if it isn't a refreshing concept and an ambitious step forward for a band that isn't content to make the same album over and over. For true listeners of that amorphous "Americana" music, all we can ask for are new sounds, girls in tight wrangler jeans, cheap beer, and please, a few songs about trains thrown in the set somewhere.
Dictated but not read by Starkny at 8:17 AM

Email ThisBlogThis!Share to TwitterShare to FacebookShare to Pinterest
Labels: autumn tone records, The Roadside Graves, We Can Take care of Ourselves