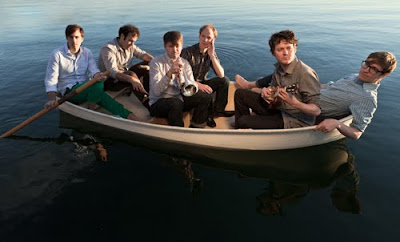 FROM PRESS RELEASE: "Beirut announces its first album in four years with The Rip Tide, set for release on August 30th.

The Rip Tide marks a dramatic and intimate shift from The Flying Club Cup (2007) and his “stop-off in Mexico” by way of the March of the Zapotec EP (2009). The album will feature “East Harlem” and “Goshen,” which appear on the band’s new limited edition single out NOW.

The Rip Tide will be released internationally and independently on Pompeii Records (via Revolver in the US), a label started, and wholly owned by Beirut’s Zach Condon with no large label affiliation whatsoever, so as to keep total creative control.

The Rip Tide track listing is as follows:

Dictated but not read by Starkny at 7:06 AM

Email ThisBlogThis!Share to TwitterShare to FacebookShare to Pinterest
Labels: Beirut, The Rip Tide