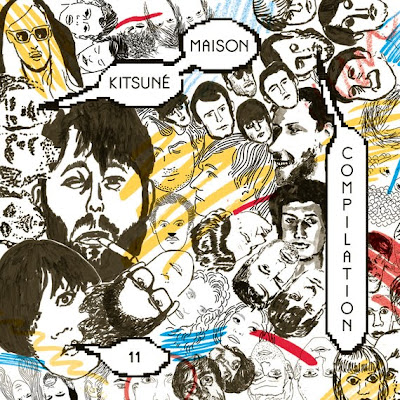 Most people on the indie-music scene want to be first to everything. First to champion the newest and coolest bands, first to say so-and-so will be the best album of year, etc...Ultimately, all of this egotistical waxing is to prove that yes, he, she or I, am "cool." That being said, we present to you, the Kitsune Masion Compilation 11 - The Indie Dance Issue releasing on May 16th. What ups the "cool" factor of this compilation is three fold: 1) Kitsune Maison is a French boutique label that doubles as a hip French clothing line 2) Most commoners will not know one artist represented on the album and 3) did we mention it is French? Foreign music sells.

You aren't missing quality here though -- this compilation, despite the above, could really blow, to use a parlance of our time. But Kitsune has managed to craft a seamless blend of fantastic, indie, dance-pop gems, one after the other working together in a purely four-on-the-floor, 'get ready for summer' musical sense. To the causal listener, the compilation may be two-dimensional or all sound the same, but to those with a well-tuned ear, there is some great music showcased. Frankly speaking, this album is for us. We like the Delorean's, Icona Pop's (featured on this album,) Naked & Famous' and Kids of 88's of the world. So, in the words of Stevie Wonder, do yourself a favor, educate your mind. Grab this compilation before the summer officially starts.

Dictated but not read by thestarkonline at 2:32 PM