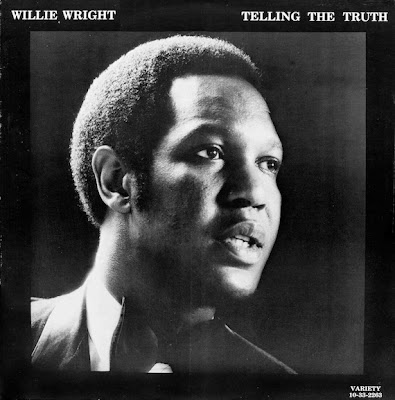 [mp3] Willie Wright: "Nantucket Island"
We've sung Numero Group's praises many times in the past, and it's no surprise that they unearthed another fantastic album recently in Willie Wright's Telling The Truth.

As you may or may not know, Stark has family that have been living on Nantucket Island for decades (year round, not just "summering") - so we feel a special connection to Wright who spent 1976 selling copies of this album out of his car while living on the island. There's a high dose of languid New England summer infused in this record. Wispy guitars and smooth lazy melodies filter in and out of these songs conjuring images of Morrison's Astral Weeks, late period Marvin Gaye and even hints of Sam Cooke here and there. It's not hard to picture a mellower 1970s Nantucket Main Street with the locals milling about and making snide remarks about the tourists, all the while, softly in the background, you can hear Telling The Truth playing from Willie's car stereo. Ahh, summer. THX

Dictated but not read by Starkny at 9:10 AM

Hi,
I'm writing to let you know that Willie Wright, whose 1978 classic LP "Telling the Truth" was re-issued by Chicago re-issue label Numero Group last year,  has made a brand new album called “This is Not a Dream.” You can hear all the new tunes here: http://www.myspace.com/willie_wright and can buy the album directly from the artist at www.williewrightmusic.com
The re-issue got very positive response from soul fans and new listeners; "Good Morning America" featured one of the tunes ("I'm So Happy") from it on May 7, 2011, and the first pressing sold out in a matter of weeks. All of this is what has inspired Willie to ease temporarily out of retirement, assemble a new band with some old friends in Burlington, Vermont, and craft his first studio album in 34 years.
He is now 73 and copes with advanced Parkinson's, but can still make arrestingly beautiful music with thoughtful lyrics. His "smooth as warm butter" voice is still powerful, even though at the same time, it reveals a more fragile and emotional side than in his early career. This new record was released by Green Coil Records in Burlington, Vermont on April 24, 2012.
Given that he is not able to gig or tour in support of the album, we are depending on reviews and word of mouth to promote it - please give a listen and let us know what you think!
Thank you
Bob Green
Green Coil Records www.greencoilrecords.com
Burlington, Vermont, USA