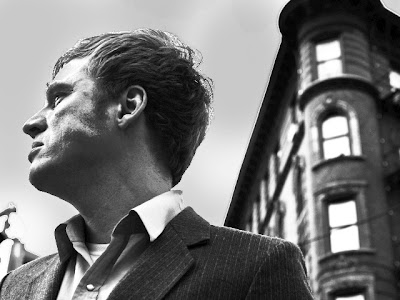 [MP3] Marcellus Hall: "Laughing With You"

Not sure how this one slipped past our radar. Marcellus Hall, a celebrated illustrator in his own right (see The New Yorker), has been on the scene for a good bit fronting several bands in the indie sphere, most notably Railroad Jerk. The First Line, is Halls' first solo album, and drops Feb 22. We don't usually like to make too many direct comparisons to other artists, but Hall's songs are awash in such a wide array of A-list influences, that it's impossible not to mention nods to Short Man's Room-era Joe Henry and non-whiny Mountain Goats tunes. There are some vintage post punk influences too (Modern Lovers and softer Paul Westerberg), but from what we've heard, The First Line hits at the core of emotive country-tinged balladry that's both subtle and poignantly powerful in the same breath.

Dictated but not read by Starkny at 7:40 AM