Bring Me Home Through Those Alabama Pines 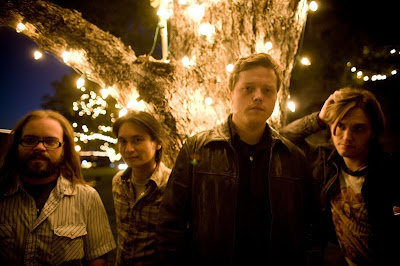 [mp3] Jason Isbell and the 400 Unit: "When My Baby's Beside Me (Big Star Cover)
Maybe it's that new record smell -- those excited first listens when you're just happy to be hearing new music from one of your favorites, but damn we've been enjoying the hell out of Jason Isbell's new album 'Here We Rest' on what's been a bleak and snow-bound day in New York. Perhaps it's the weather, but there's seems to be a melancholy inherent through this new set of tracks, a tension, a resolution, and a sadness that hasn't been in every Isbell album we've heard. Of course, the production here is impeccable. That full-bodied Muscle Shoals sound rounds out every track with swelling organs, warm bass, and ringing guitars. Again, maybe it's too early to say, but these tracks seem to be some of the best Jason Isbell has composed in years. If they're enough to be counted with "Dress Blues", "Godamn Lonely Love", "Seven Mile Island", "Decoration Day" and "The Day John Henry Died" remains to be seen.
'Here We Rest' comes out April 12th on Lightning Rod Records. Jason Isbell and his band The 400 Unit have also just announced a slew of tour dates, including a run with the excellent Hayes Carll.

Email ThisBlogThis!Share to TwitterShare to FacebookShare to Pinterest
Labels: Hayes Carll, Here We Rest, Jason Isbell and the 400 Unit