Decemberists Reveal Cover Art for The King Is Dead 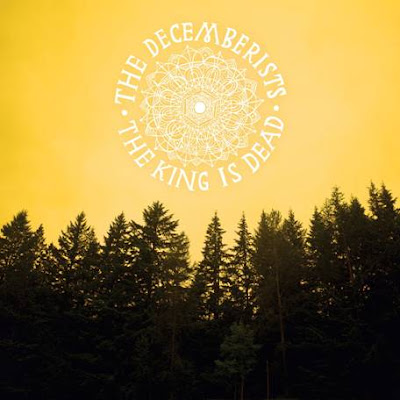 [mp3] The Decemberists: "Down by The Water"
This one is really a no brainer for us. The Decemberists, Gillian Welch, a Portland barn, and “a set of 10 concise, country-based songs.” Come on! The lead single “Down by The Water” is hooky and lush with sweeping harmonica leads and Gillian Welch’s backing vocal properly juiced in the mix. With a January 18th release date for The King Is Dead, The Decemberists look to capture early 2011 fans, as the majority of priority releases seem to be dropping on the 25th. Smart move. The Decemberists hit Conan on Nov 18th and the pre-order begins Nov 22. The new album sounds like a refreshingly spare effort compared to their wildly ambitious, yet fairly bloated (for these ears anyway) last effort The Hazards of Love. Of The King is Dead Colin Meloy notes: “For all my talk about how complex those [previous] records were, this one may have been harder to do,” he says. “It’s a real challenge to make simple music, and lot of times we had to deliberately hold off and keep more space. This record is an exercise in restraint.” Mark this one as highly anticipated.

Dictated but not read by StarkNY at 7:06 AM

Email ThisBlogThis!Share to TwitterShare to FacebookShare to Pinterest
Labels: cover art, gillian welch, mp3, the decemberists, The King is Dead