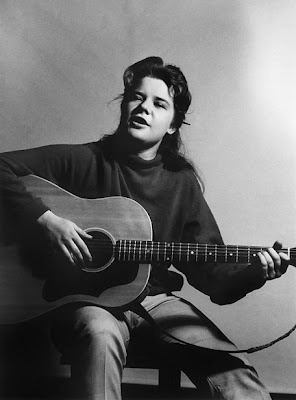 We've been on a huge Janis kick recently. When is the last time you really listened to her, or have heard a modern artist even come CLOSE to some of those classic vocal performances? We loved this photo when we saw it this morning and had to share. From Spinner:

Looking more like a folkie beatnik than the wildly dressed, sexually charged psychedelic blues rocker she'd become, Janis Joplin appears for a portrait during her short time as a University of Texas art student. A month after enrolling, the student paper ran a feature on her, headlined 'She Dares to Be Different,' which noted that she performed in a trio called the Waller Creek Boys while leading a life "that is enviously unrestrained." By 1966 she had moved to California, and a year later she was one of the stars born at the Monterey Pop Festival. On Oct. 4, 1970, Joplin overdosed at the Landmark Motor Hotel in West Hollywood, Calif. Like Jimi Hendrix, who died roughly two weeks earlier, she was 27.