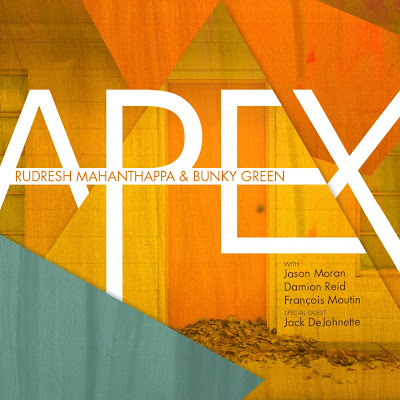 It's hard to find another angle to Alto Sax playing these days. Fast, slow, precise, sloppy, bright, cloudy, breathy, wild - they've all been covered. Somehow the extremely talented Rudresh Mahanthappa has found something new and miraculous to say with his horn. Blending elements of straight Jazz with melodies from southern India, Mahanthappa creates an intoxicating, challenging, and beautiful synergy of past and future Alto legacies. His new album, Apex (9/28 Pi recordings), features Mahanthappa upping the ante further, by teaming with the legendary saxophonist Vernice 'Bunky' Green, a 75 year-old unsung hero of the instrument. Also included in the amazing band are (of course) Jason Moran, alongside of Jack DeJohnette, Francois Moutin & Damion Reid. Mahanthappa's last record Kinsmen remains an unexpected highlight of 2008, and here's to hoping Apex which: "features originals by both Mahanthappa and Green specifically created for this collaboration... highlighting a collective vision of using traditional forms as a launching point for contemporary improvisation and interaction at its highest level" dominates our stereo in the same fashion. (Quote from the PR).

Dictated but not read by StarkNY at 11:08 AM