Remove Not The Ancient Landmarks 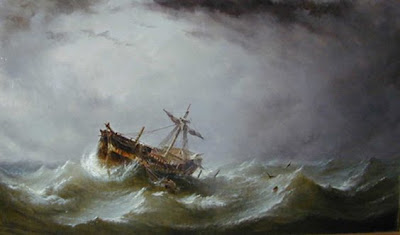 [mp3] Missincinatti: "A Hundred Years Ago" Stay with it. Let it build.
Pretty much anyone who has had a passing contact with me, ever, will read this post and say "of COURSE you would post that." Well, you're damn right I am. Can anyone buy me that painting?
Admittedly, I have an extremely tenuous relationship with Altered Zones. Not in the way Chris Weingarten does -- most of the music on the site, just isn't my speed. Maybe after smoking a fat bowl of opium at 3am I could get down on some of the bands, but, it's just not in my current purview. Music is subjective. I say godspeed Altered Zones, I wish you all the best.

I digress. Today, 20JazzFunkGreats posted on AZ about this fascinating LA band Missincinatti who's album Remove Not The Ancient Landmarks is available now HERE. I just downloaded it. I have no desire to learn more about the band. I just want to listen to the music, and let my brain draw its own conclusions. How Altered Zones of me. Their songs are described on their site as:

"Forgotten tales of shipwrecks, fantastical crocodiles, a suicidal captains mistress, and the various hardships and sorrows of a life at sea. These seasoned stories are told through chamber-esque compositions, field recordings, and timeless arrangements of old melodies created by Jessica Catron, Jeremy Drake and Corey Marc Fogel.

Dictated but not read by StarkNY at 10:46 PM