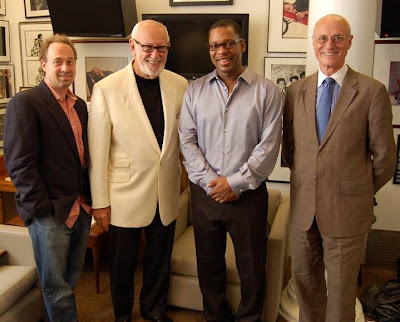 Another one of my career highlights, (though probably my least vivid memory, for several reasons) remains introducing Ravi Coltrane on stage before his appearance at Bonnaroo in 2007. Being in Coltrane's presence, is simply put - eerie. His distinct resemblance to his father, not to mention his severe talent, will stop you cold in your tracks. Being John Coltrane's son, is pretty much the equivalent to being the son of Jesus in the Jazz world. An overstatement maybe, but not by much. Faced with challenges and expectations that no musician should bare, Coltrane has managed to navigate the tricky modern jazz world, create his own sound, and truly mature as a player and band leader in his own right. It's no surprise then, that Blue Note would sign Coltrane at this point in his career, rather than many years previous, where the move would've been based solely on the name, rather than his playing and compositions - something neither Coltrane would have respected.

Ravi Coltrane is poised to enter the studio in December to record his Blue Note debut due this Spring. From the press release:

This Fall, Coltrane will be going out on a short run of U.S. tour dates with his quartet to prepare material for the new recording, including engagements at the Village Vanguard in New York (Sept. 21-26), Yoshi’s in Oakland (Dec. 3-5), The Dakota in Minneapolis (Dec. 6-7), and the Jazz Showcase in Chicago (Dec. 9-12). In addition to a European tour with the Saxophone Summit in November, Coltrane will also be heading to London this month where he will be doing a BBC Radio 1 session and performing at the London Institute of Contemporary Arts with his cousin, the experimental hip-hop and electronic music producer Flying Lotus (born Steven Ellison), on whose acclaimed new album Cosmogramma Coltrane also appears. For a complete tour schedule please visit www.ravicoltrane.com.

Dictated but not read by StarkNY at 7:12 AM