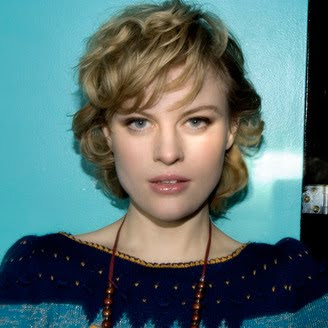 A true treat for a Monday, we have two guest list spots to giveaway to see Ólöf Arnalds TONIGHT in NY at special show at ROCKWOOD MUSIC HALL. The 4th person to email me at starkny at gmail gets the spots. This will be one of Rockwood's rare ticketed show, and will not be free like most are at this intimate venue. This show should be fantastic, as Ms. Arnalds tends to play larger venues. She was a special guest of Bjork (on her new single) and the Dirty Projectors at their famed Housing Works show last year. We'll see you folks at Rockwood tonight!

It's been several years since the initial release of Ólöf Arnalds' breakout record Við og Við, which was reissued stateside and followed by a very successful smattering of tour dates which brought the Icelandic Arnalds to the forefront of the US critical consciousness. Yet, all the success and touring meant an inevitably longer wait for new material. Several weeks back, One Little Indian announced the release of her new album Innundir Skinni (Sept 14) produced by Sigur Ros’ Kjartan Sveinsson and Davíð Þór Jónsson and featuring contributions from Björk, Skúli Sverrisson (Laurie Anderson, Lou Reed) and the always amazing Shahzad Ismaily (Tom Waits, Bonnie "Prince" Billy). See her cover Arthur Russell's "Close My Eyes" after the jump.

Dictated but not read by StarkNY at 8:46 AM

Great information about ticket, thanks for sharing with us.