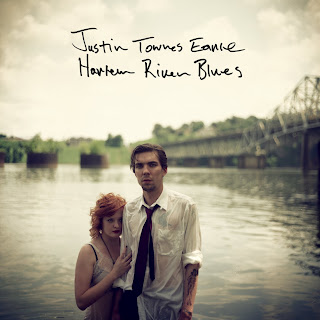 Justin Townes Earle: son of the infamous Steve Earle, illustrious emerging songwriter on the Americana/Folk scene, sharply dressed man, and at times, our neighbor. It's hard to miss this roughnecked, finely suited, lanky fellow when romping around in the East Village -- on occasion, Earle can be found sipping a pint at 11th St. Bar, or wandering Ave. A with Jason Isbell. Either or, once you listen to JTE's music, he will manage to stay with you one way or another.

We are very pleased to announce the upcoming release of this, JTE's thrid record, Harlem River Blues on Bloodshot Records, September 14. After releasing Midnight at the Movies to much critical acclaim in 2009, JTE slowly began emerging from his father's shadow (if he was ever even in it to begin with) and making a name for himself. With songs as grippingly powerful as "Mama's Eyes"  and "Midnight at the Movies" coupled with playfully jaunting tracks such as "South Georgia Sugar Babe," and "Black Eyed Suzy," JTE is the whole package. His music works for those lonely days in 11th St. Bar, or that night out at your favorite honky tonk -- Earle knows music, and does not disappoint.
Dictated but not read by thestarkonline at 8:48 AM