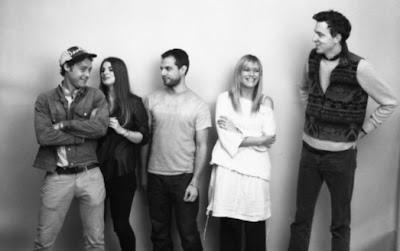 [mp3] Here We Go Magic: "Collector"
Admittedly, we've been spinning this record since it's way-to-early leak several months ago, but that extra time spent with Here We Go Magic's second LP, Pigeons (6/8 Secretly Canadian) has not dulled this ecclectic and compelling band's luster. Pigeons is an entirely different animal (sorry) from HWGM's stellar self-titled debut; the sound is closer in the headphones, and decidedly more analog. Luke Temple's songwriting veers away from the signature "Paul Simon" influence of the debut, while the band sounds tighter and more cohesive. Pigeons is a tough nut to crack, and honestly, the jury is still out with final verdict. It's clearly a step forward for the group as they become more of a band, rather than just a vehicle for Temple's songs. The true test of these tunes will be the live show. Luckily for us, Here We Go Magic will be playing on release day, June 8th at Music Hall of Williamsburg with War on Drugs. War on Drugs are excellent in their own right, yet have A LOT to prove live, after we caught a particularly dismal outing at The Mercury Lounge over a year ago. HWGM tour dates and video after the jump.