Delta Spirit: History From Below 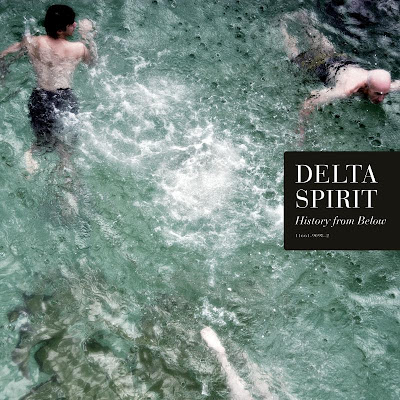 [mp3] Delta Spirit: "C'mon People"
We've been spinning the new Delta Spirit record, History From Below, for more than a week, and it's a marvelous step forward from their debut, 2008's Ode To Sunshine. While Ode was heavily lauded across the board, it failed to connect with us, despite falling right into our wheelhouse: home-grown, jangly country-tinged rock. Yet, there is something different about the songs on the new record. While not straying far from the formula of their first record, it's clear that the time between records spent with artists such as John McCauley (Deer Tick) and Taylor Goldsmith (Dawes) as well as producers of 'History' Bo Koster (My Morning Jacket) and Eli Thomson has paid dividends on the songwriting front. Delta Spirit's new record is melodic to the core and equal parts intimate and huge. History From Below comes out June 8 on Rounder. We're still waiting for new approved music to post.

As an AMAZING bonus, our longtime favorites, Ezra Furman and The Harpoons will be opening dates on Delta Spirit's huge national tour. Here's hoping for some solid national exposure for our friends from Brooklyn. Dates after the jump.

Dictated but not read by StarkNY at 8:35 AM

Email ThisBlogThis!Share to TwitterShare to FacebookShare to Pinterest
Labels: Delta Spirit, Ezra Furman and The Harpoons, History From Below