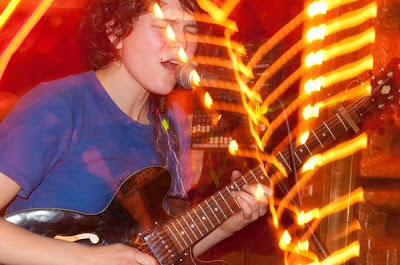 [mp3] Blair: "Hello Halo"
[mp3] Blair: "Rampage"
Stark and Aquarium Drunkard are extremely excited to once again be presenting Blair, this time with excellent New York bands Shark? and Gunfight. Blair's debut effort Die Young is an eclectic amalgamation of carefully-wrought, folk-inspired, acoustic songs alongside straight-ahead, 90s alternative rock-style compositions. There is a subtle melancholy that permeates each track, while Blair's charisma and energy give Die Young a buoyancy and strong undercurrent of positive energy. Blair channels vintage Neil Young and Bowie alongside more contemporary influences such as Yo La Tengo and Feist. We caught up with her by phone to discuss the new album, the differences between her recorded material and live show, and her love for classic 90s FM radio. Read our conversation after the jump.

So you're originally from New Orleans. Are you living in New York full time now? Do you miss New Orleans?

Yes, I'm living in Brooklyn now; I've been here since March of last year. It was a clean move, and haven't been back since I moved here. I miss it so much, especially now with Mardi Gras and the Saints winning. I'll be playing one show there in March on the way to SXSW.

How did growing up in New Orleans influence you musically? It's more of a Jazz and Funk city, but it's still extremely musical.

I was more influenced by FM radio in my room, and MTV more-so. Even though New Orleans is buzzing with that music, I didn't live right in the quarter or anything, I lived on the outskirts. I was listening to what MTV told me to listen to. When I got older, I became more aware of the importance of Jazz, but for whatever reason I tapped more into pop.

What specifically sticks out in your mind from that era?

I guess I remember the "Loser" video from Beck. I remember that being really big. I started buying everything that Beck ever did. Dookie from Green Day; they just have great melodies and great songs. Metallica the Black Album, and Nirvana -- still my favorite band. I'm a product of modern FM radio.

I was frightened by those early Metallica records [laughs] with like, blood on the cover. I was like 'I want the one with the black cover.' Blood Sugar Sex Magic, my older cousin had that, and I ended up really loving it.

You cover a lot of ground stylistically on the record. What do you feel is the overarching element that ties the album together stylistically or lyrically?

The fact that there is a variety of styles on there. I think comes from the songs being collected over time. One of them might be four years old and one is six months old. I was influenced by different things at different times. The thing that holds it together is that I tend to write, verse-chorus, verse-chorus; the melodies are slightly melancholy, but the subject matter is a mix of sweet of and sour. As I reflect on my music, I would say that I am trying make something ugly, pretty; an attempt to make something painful, beautiful or to convey abstract stories beautifully.

Die Young is sort of a darkly romantic album title; where did that come from?

The phrase kind of stuck in my head while living in California. It's a concept that is dark, but there is something alluring and romantic about it as you said. Young heroes, young rock stars, dying young. The concept is at odds with the approach to life that I feel is ingrained, which is to play it safe and make sure things will last...and make sure that things make sense before you try it. To be willing to die for what you're doing -- to not think it through so much -- to follow your instincts or whatever your first choice was. To disregard the consequences when you do it. But that's not always the best way to go [laughs]. I think sometimes people are fearful of just jumping into things. I think people are afraid to do that.

What have you been listening to recently? New, old?

I listen to a lot of David Bowie, The Beatles, guitar music, like John Frusciante's solo stuff...it's really melodic. I try learn a lot of that on the guitar. Most recently, Grizzly Bear, Wavves I liked a lot. I'll definitely check out music from blogs; I like the XX. Mostly Neil Young, a lot of Dylan. We played with this band Oberhofer and they were great. I bought their CD and I've been listening to it a lot. It's really lo-fi and great.

What's next for you after the residencies and for the rest of the year?

The plan is to do some extensive touring, funding permitted, and to try and play as much as possible in the states...maybe go over to Europe to play dates. There is a possibility of that. I'm always writing.

I want to keep playing this record in its live form and for people to hear it that way. The live act is a little more rocking and has a different energy to it.

Can you talk some more about the differences between your recorded material and the live show?

I think probably something that influences this, is that when you're making the record you have an infinite amount of tracks -- you can have five horns and five guitars. You're limited as to your instrumentation live. You have to decide what's going to push the show. On the record, I can sing softly into a microphone; live you're just trying to go for it and not make it the prettiest thing I've ever heard. It's that that rock set up and interpreting the songs...just trying to stay exciting. We often change things up not to get bored. Adam has been on keyboards for seven years, Zach on drums and Brian on bass. It's much more what people bring to the table; the live act is collaborative. It's also about having a producer in the studio. You can't just rock out on a record...there has to be a sound. Maybe if there were 12 people on stage we could match that dynamic.
Dictated but not read by StarkNY at 12:33 PM