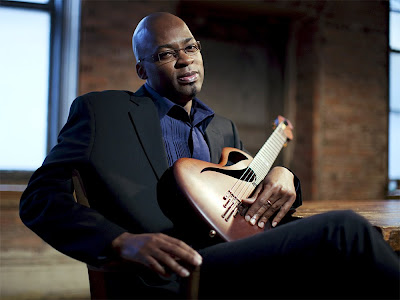 Stream Mwaliko (2/9 Blue Note Records)
Over the past three years, the music world has been awash in stellar reissues from all regions of Africa. We're all quite thankful for that to be sure. Yet, it's necessary to turn our eyes to some more current African exports, most notably, guitarist Lionel Loueke from Benin. His fantastic new album Mwaliko (Swahili for "invitation") comes out next Tuesday 2/9 on Blue Note Records, who also released his groundbreaking Karibu to much acclaim in 2008. You can hear Mwaliko in its entirety right now at NPR. In the interest of full disclose, we had the distinct pleasure of working with Mr. Loueke on the Karibu record campaign, but that fact takes nothing away from the technical and compositional talent of this multi-faceted jazz guitarist.

Already counting Herbie Hancock, Wayne Shorter, and Terence Blanchard (among many others) as collaborators, Loueke is well renowned in jazz circles; yet his sound has done much to bridge gaps between jazz and mainstream music communities. In a recent AOL Spinner article, Loueke notes his efforts to help American audiences absorb his traditional African arrangements and folk styles, while striving to bring the same understanding about American jazz composition and style to his native audiences in Benin.

Loueke should give himself and audiences more credit. Talent is universal. But his genuine modesty is ever-present. Whether it is Loueke's absolutely captivating live performances, or his recorded material, which deftly incorporates keen melodic harmonies, speed, well-crafted compositions, and remarkable vocal percussion techniques (yes, he does all of this at the same time); Loueke is one of the premier African talents making music today. His instrumental proficiency can be mentioned in the same breath as Toumani Diabate and his cross-over potential with that of Amadou and Mariam. While you shouldn't expect to see Mr. Loueke packing out Webster Hall with a full band anytime soon, his music, beginning with Mwaliko, deserves mention alongside the best music coming out of Africa right now, past or present.

Dictated but not read by StarkNY at 3:50 PM