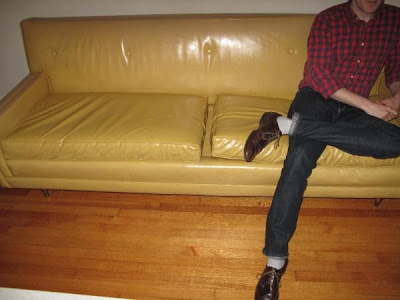 
Early this morning, before coffee, we listened to "Central Park" by the LA group Gamble House as recommend by Some Velvet Blog, who called their self-titled debut "one of the best debut albums of the year so far." Coupled with the sounds coming out of the speakers, we got a rare pre-caffeine bolt of adrenaline.

Gamble House purvey a gauzy and delicate brand of orchestral folk that lands somewhere between Midlake and Grizzly Bear, and sounds like walking through the woods in upstate New York during an afternoon snow storm. The instrumentation is rich and careful at times, and ultimately buoyed by the stellar vocal performances of singer and lead member Ben Becker.

We've only taken our first listens to the album today, so it's hard to give you the full scope of the project. Yet, from what we have heard to date, it's clear that Gamble House have a fully conceived and realized vision that deserves immediate attention. Yes, they are likely to garner many comparisons to Yellow House era Grizzly Bear. But coming from bloggers that are admittedly so-so on the old 'Bear, we can say that the melodies and song structures on this record are in many ways superior to multiple Grizzly Bear compositions. While Grizzly Bear rely on instrumental flourishes and pomp, Gamble House are content to fill those spaces with choruses, hooks, and actual substance. Well done.

All comparisons aside, we're extremely glad to have Gamble House on our radar, and look forward to what they have coming in the year ahead. You can buy Gamble House's debut HERE.

Dictated but not read by StarkNY at 3:46 PM