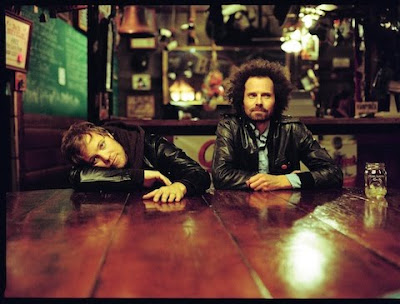 [mp3] Rogue Wave: "Good Morning"
Recorded around some harrowing circumstances which included the death of a former band member and some serious health issues, Rogue Wave persevered to record their new record Permalight, which drops March 2 on Brushfire. Definitely a different sound than we're used to from Rogue Wave and the new single has certainly drawn the ire from some die-hard commenters. What doesn't though? It's not our favorite song ever, but to compare it to Owl City is just ridic. Click after the jump for some clips of the band in the studio. This also gives you a pretty nice flavor for what the rest of the record is going to sound like, like it or not. Don't worry, there's some acoustic guitar. Don't get your knickers in a bunch.

Dictated but not read by StarkNY at 6:11 PM