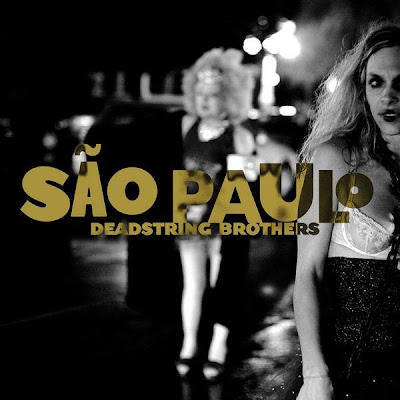 After what was hopefully a temporary lull in quality output with 2007's Silver Mountain, Detroit's favorite Stones-loving, blues-rock fueled band The Deadstring Brothers have returned with a new record entitled Sao Paulo, due February 23th on Bloodshot Records. We here at Stark have a deep love affair with their 2006 effort Starving Winter Report. Yet, for some reason Silver Mountain's heavier musical approach and lead vocals from former back-up singer Masha Marjieh didn't do it for us. From initial listens to Sao Paulo, it seems the Deadstrings have returned to their winning formula, channeling Beggars Banquet style guitar riffs, and ditching the female lead vocals. If any other band pulled this heavily from the Rolling Stones' catalog they would be quickly dismissed as cheap rip-offs. Yet, The Deadstring Brothers use some sort of mystical alchemy to make songs so derivative, sound original and cutting edge. They also happen to be one of the best live bands out there. New Deadstring Brothers = a great day.

Dictated but not read by StarkNY at 8:40 AM