Some Creepiness from Out West 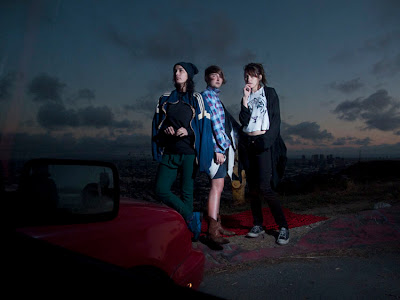 [mp3] Warpaint: "Billie Holiday"
[mp3] Warpaint "Elephants"
Well, here it is folks, our Warpaint post! The three West Coast lasses conquered the East during CMJ, and are continuing the push behind the Manimal Vinyl reissue of their EP Exquisite Corpse, produced by none other than John Frusciante. The three women Emily Kokal, Theresa Wayman and Jenny Lee Lindberg play a uniquely Californian brand of hazed-out psych folk. It's ethereal, haunting, melodic and dark. We don't get this kind of stuff out East man. The band continues its big push, and are certainly going to be on the tip of everyone's tongues heading into 2010. Check out the video for "Stars" after the jump. It's worth it.

I have a sneaking suspicion we do have this type of stuff out east. Despite that, me likes a lot.