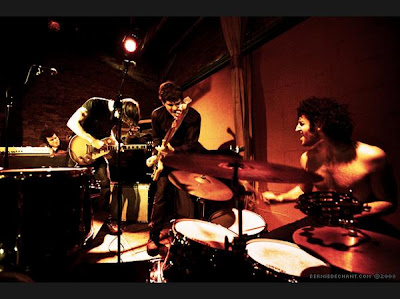 We've been following this excellent group for almost a year now, and we're glad to offer a brand new mp3 from The Dig's upcoming LP that they just finished recording with Bryce Goggin (Pavement, Sean Lennon, Apples in Stereo, Sebadoh). The new song "Two Sisters" shows the promise of the band's upcoming recorded output, which had been a question mark, as the band had been steadily touring behind only a three song EP. Yet, their live show and quality of their music on stage is what sold everyone on this group and lead to dates with The Walkmen, White Rabbits, The XX, Here We Go Magic, Rural Alberta Advantage, Girl Talk and others. The Dig play a highly-melodic brand of brit-influenced power-pop, layered with keys and guitars with singer David Baldwin's resonant voice sitting high in the mix. Trust us, see this band now, as we're pretty sure they're going to have a big 2010. The Dig play tonight at the Mercury Lounge.

Dictated but not read by StarkNY at 10:42 AM