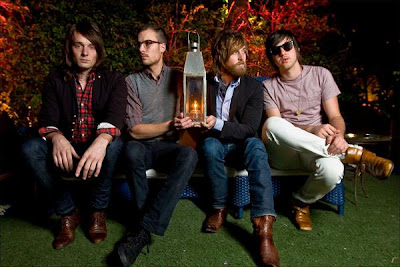 [mp3] US Royalty: "Every Summer"
The Washington DC four-piece US Royalty has just signed to NY's Engine Room Recordings and has just released a new digital EP entitled Midsommar, which also comes out on 7" on October 6th. Best described by the Washington Post as "Southern boogie-rock" US Royalty's live show has been drawing widespread attention. While largely still a baby-band, US Royalty have already been remixed by Passion Pit, and tonight find themselves supporting Throw Me the Statue at NY's Mercury Lounge. Furthering their quick rise, is a video directed by Jake Davis, who has also directed videos for The Hold Steady and My Chemical Romance. Their blues tinged soul-rock recalls a more pop-centered Spoon with touches of the aforementioned Hold Steady and their peers Art Brut. Watch the video for "Every Summer" after the jump!

Dictated but not read by StarkNY at 1:38 PM

Email ThisBlogThis!Share to TwitterShare to FacebookShare to Pinterest
Labels: US Royalty