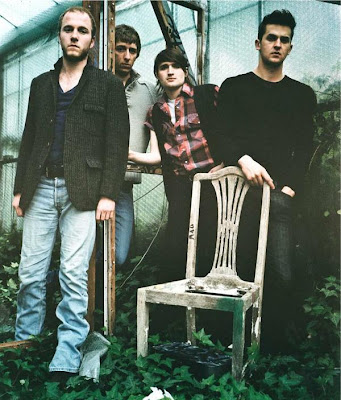 [mp3] Wild Beasts: "All The King's Men"
[mp3] Roman Candle: "They Say"
It's a busy concert week here in NY. We may be the most excited about tonight's show at the Mercury Lounge though which features the quickly rising stars Wild Beasts and Stark friends Roman Candle.

Headliners (8:30 p.m.), the Wild Beasts just received a positive review from Jon Pareles in today's New York Times to go along with their Best New Music tag from Pitchfork. The best part about this English group is that they pretty much deserve all of the accolades they've been receiving. Pareles drew out all the accurate references the 'Beasts draw from, most notably Dirty Projectors, New Order and, of course, the Talking Heads. The Wild Beasts' new record Two Dancers runs the gamut from dark, brooding, English melodies, to more sharp and pointed dance-rock. Two Dancers came out on Tuesday via Domino. Wild Beasts played Joe's Pub on Tuesday, Mercury tonight and Union Pool tomorrow.

Rounding out tonight’s oddly pared bill is openers Roman Candle (7:30 p.m), the smart Nashville-based pop-infused indie rockers who come equipped with more than a tinge of southern roots. Their extremly well-crafted songs are light and generally quite plesant. Exhibiting all the latter in fine form, Roman Candle's recent release, Oh Tall Tree in the Ear, is a crisp and entertaining record reflecting the true genuine qualities of this hardworking and simply put, extremely nice band -- they are great guys (and gal) that put out a good record and are bound to put on a great performance.