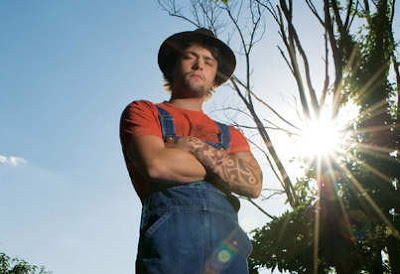 It's been almost 2 years since we've been able to write about Chris Denny. We discovered him randomly one summer after he played at the 11th st bar about 20 feet from my house. It took about 2 seconds of listening to his debut record Age Old Hunger to fall head over heals for him. Denny's jarring Southern falsetto comes from a different time and it damn sure doesn't sound like it comes from anywhere near New York City. Yet rumors have it that this Arkansas native has relocated (at least part time) to Brooklyn on the back of his signing to Partisan Records. Denny has struggled to find his niche, even playing some dates on the singer-songwriter lite Hotel Cafe tour. With Partisan, it seems like Denny has found a great home.

This October, he will be part of a stacked tour just announced today entitled the Green Manalishi Tour featuring fellow Partisan artists Deer Tick, Holy Sons, Dolorean and Paleo. Exclusive East Coast dates after the jump. Partisan has also kindly made up a killer sampler featuring tracks from all of the above artists including a brand new Chris Denny song. Tracklist ATJ. It seems that Partisan, an artist run label representing a group of "counter-culture misfits" is on absolutely the right track; and despite their worries about this "Bacchanalian gathering"we feel that it can only be destined for success. Right?