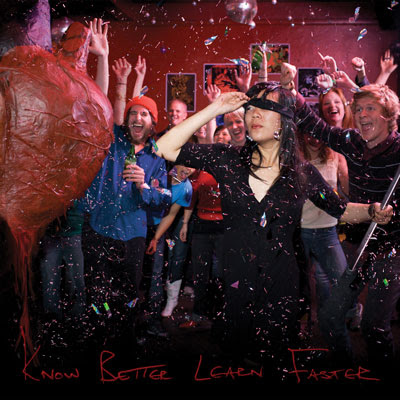 [mp3] Thao and the Get Down Stay Down: "Know Better Learn Faster"

If you've been with us over the past few weeks, you know how excited we are for the new Thao and the Get Down Stay Down album Know Better Learn Faster. On Friday, we got our first taste of the album - the title track from the record that also features fellow N.Westerner Andrew Bird. True to rumors, this track reflects Thao's more wistful side. Whereas her stellar debut We Brave Bee Stings and All featured bubbly summer pop, this new record promises more introspective lyrics and a softer more autumnal sound. That still doesn't take away from Thao and her band's utter badassity. Know Better Learn Faster is out October 13th on Kill Rock Stars.

Elsewhere in the Thao world...


The Portland Cello Project will be opening for and occasionally playing with Thao and her band on their current string of tour dates. The PCP could be the culprits behind Thao's new laid back sound, as Thao collaborated with them on their recent release The Thao and Justin Powers Sessions, which came out in June on KRS. The cello often provokes the most introspective of moods, so it's no surprise that the PCP tracks we've heard are downright gorgeous heartbreakers. Tour dates after the jump.

All shows are with Thao with the Get Down Stay Down, David Shultz

Dictated but not read by StarkNY at 7:57 AM

Email ThisBlogThis!Share to TwitterShare to FacebookShare to Pinterest
Labels: Portland Cello Project, Thao, Thao and The Get Down Stay Down