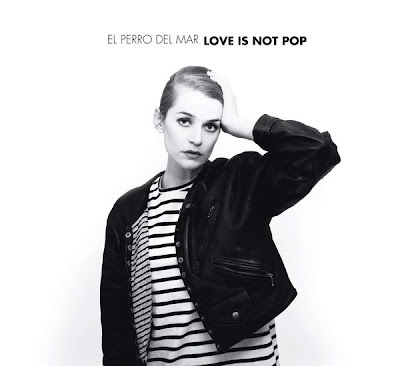 Swedish songwriter El Perro Del Mar (Sarah Assbring) returns on October 10th with her third record Love is Not Pop coming out on the Control Group label. El Perro Del Mar will play two headline US shows in NY and LA and tour with Peter Bjorn and John on their N. American dates in November. Assbring's first two full-length efforts, 2006's eponymous debut and 2008's From the Valley To the Stars, were sweetly melancholy affairs showcasing Assbring's charming voice and solid songwriting talent. The records succeeded in their ability to flirt with a certain twee-pop quality without ever succumbing to it's dangerous ways. Songs from her new record are streaming at myspace. Of the new record Assbring states:

I'd spent some bad times in New York and some good times in Paris and both these cities have made a great imprint on this album and my current outlook on love. I've decided to call it 'Love Is Not Pop' - the songs on the album are all pop songs and they are all about love. But naturally, it is not all as simple as that. As much as pop can be love and vice versa - I'd like to believe that love goes so much deeper than a pop song.

Dictated but not read by StarkNY at 12:35 PM

Email ThisBlogThis!Share to TwitterShare to FacebookShare to Pinterest
Labels: El Perro Del Mar, From The Valley to the Stars, Love is Not Pop, Peter Bjorn and John