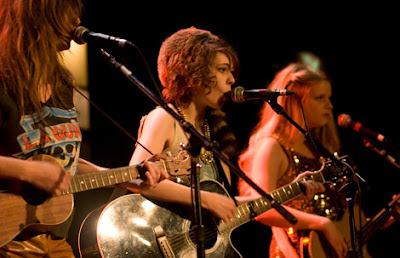 [mp3] Those Darlins "Red Light Love"
Needless to say, it's been a tenuous relationship between Stark and Those Darlins. Somewhere along the way during the past year though, we came around to their live show, and after spending the weekend with their new self-titled record that drops this Tuesday (vinyl only) on Thirty Tigers, we're legit converts. It's filled with enthusiasm, passion and a punk rock ethos -- all backed by quality songs that channel an earlier era of country music before the dubious prefix "alt" ever became attached. So here's the first single "Red Light Love," the lead track on the record. This song will show what the fuss is all about ; it's catchy, it has the Darlin's trademark Murfreesboro, TN swagger and demonstrates the power of a tambourine when it's juiced in the mix. Enjoy. Those Darlins hit New York on July 9 and 10 and play their vinyl -release show with the Black Lips this Tuesday in Nashville.

Dictated but not read by StarkNY at 8:02 AM