This Week In Loggins 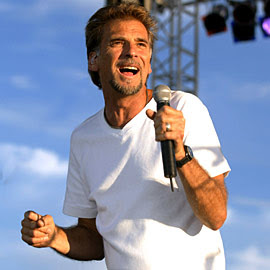 Kick off your Sunday shoes! Footloose troubadour and Pooh-enthusiast Kenny Loggins is gearing up for the release of a brand new disc full of soft rock jams, All Join In, hitting stores July 21 on Walt Disney Records.

But instead of promoting the album conventionally - i.e., by way of touring - Loggins is venturing into the Danger Zone: appearing live on QVC on Thursday.

That's right! This Thursday, June 11 at noon you can catch Loggins performing songs from All Join In and helping sell the latest kitchen appliance du jour to an audience of passionate daytime shoppers.

Hey, the man has sold over 25 million albums worldwide, so whatever works, right?

For more This Week In Loggins, continue after the jump!

During the broadcast, Loggins is scheduled to perform a selection of songs from the forthcoming record and share his personal experiences recording it. Fans will also have the opportunity to order the album, which has been specially packaged for QVC with two bonus tracks (!), more than a month before street date. For those curious, All Join In features new songs as well as new renditions of some of Loggins' favorite songs, including The Beatles' "All Together Now," and Donovan's "First There Is A Mountain," which features Loggins' 11-year-old daughter Hana contributing vocals. That deserves an "aww!"

Surprisingly enough, Loggins isn't the first fading musician to shill product on QVC. Kindred spirits James Taylor, Carly Simon, Burt Bacharach and Marie Osmond are only some of the artists to have used the shopping network as a promotional platform in the past. Give them credit for knowing their audiences.

You can try to connect with Loggins himself through QVC at 1-800-345-1515. Might be tough, but if you're really set on communicating with the singer, why not scope his Twitter? Follow as his publicist he updates the page with vital information surrounding the release of All Join In and what he has for dinner.

Dictated but not read by Andrew Daniels at 1:29 PM