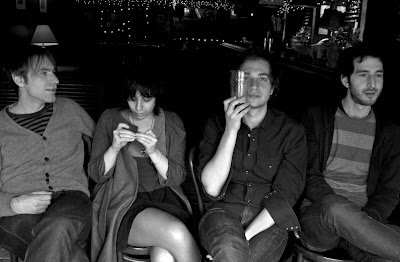 The Brooklyn band Murder Mystery have been slowly making a name for themselves since the release of their 2008 debut album Are You Ready for the Heartache Cause Here It Comes. They've been playing a good amount of shows in NY and Brooklyn and tonight are capping a wave of recent success with an opening slot during Art Brut's triumphant week-long residency at the Mercury Lounge. Murder Mystery are definitely a pop-based band. Yet, they are the perfect '09 amalgamation of dance-synth, intertwining vocal harmonies, and driving rhythms - all of which create a potent mix for a band that's not ashamed to hit you in the face with a great hook. They just finished their self-titled sophomore album recorded with producer/engineer Roger Moutenot (Yo La Tengo, Sleater-Kinney, Lou Reed) due for release this fall. If you can't catch them tonight, see after the jump for other NY tour dates.