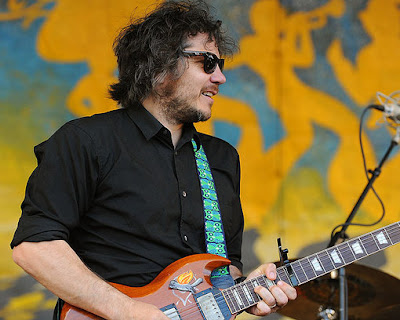 So according to Rolling Stone, the new Wilco album is called Wilco (The Album). This album will include "Wilco (The Song)" an open-hearted tribute to their fans that first debuted on The Colbert Report during the election. We actually sorta love the song. Wilco (The Album) comes out in late June with festivals and touring to follow. Go get em fellas. RS writes:

There’s a little something for everyone on the group’s new disc, which they recorded in their loft space in Chicago. “One Wing” and “Sunny Feeling” are breezy, pop-friendly tunes; “Deeper Down” is a mellow ballad spiked with atmospherics and chamber strings; the nearly-six-minute jam “Bull Black Nova” starts with rollicking drums, stacatto keys and guitars before exploding into a killer solo from guitarist Nels Cline. Think of the it as a sonic follow-up to the kraut-rockin’ “Spiders (Kidsmoke).”

Dictated but not read by StarkNY at 5:38 PM