Despite the numerous record store day exclusives Other Music offered on Saturday, I chose to take a safer and more traditional approach to my purchases - picking up 5 excellent, but tested records. Even if I was a little behind on a few, all are worth mentioning here. I'm not going to give them ratings, because I haven't been able to absorb them enough at the time of writing. 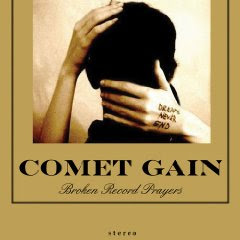 Yeah, I'm late to the Comet Gain party. They have been making outstanding British pop since 1992, and Broken Record Prayers is a compilation of their lost singles and outtakes that plays like the best mix tape you've ever received. The melodies are outstanding, while the lyrics capture every sentiment of melancholy and doubt you ever experienced growing up -- all of this packaged in jangly staccato guitars and the catchiest indie hooks you've heard this side of the New Pornographers. Required listening for new and old fans.

See what else I picked up after the jump...

The Monks just came out of nowhere this past month with the reissue of two records that amount to a missing link in the linage of garage rock and early pop infused punk. Pitchfork just labeled them Best New Music this morning - so yeah, that happened. These two reissues remind us that there were people taking jagged, pitch-bending, blues-influenced guitar solos long before Jack White. If lo-fi rock is your jam, you should probably get these records before you touch anything else made in 2009.

This is one of the latest reissues from the always reliable Numero Group. Honestly, you don't even need a review or description to buy one of these albums. Just pick one at random, you can't go wrong. Yet, for the more experienced, Downriver Revival draws its music from the town of Ecorse, MI just "down the river" from Detroit. The music Felton Williams collected here runs the gamut from gospel, to funk, to jazz, to even a form of garage rock. Every track is a keeper, and a testament to the hard work of the Numero folks for getting these tunes back out there.

Contributor Mike Bailey could offer up a better overview of Bill Callahan and Smog than I ever could. There's just no way to fit it all into a short takes section. From Best New Music on Pitchfork, (why so many Best New Music tags of late??) to a great in-store at Other Music, Bill Callahan has managed to stay relevant in 2009. This is of course, due in large part to his fantastic songwriting, and his all around general awesomeness. Enough said.

Dictated but not read by StarkNY at 12:12 PM