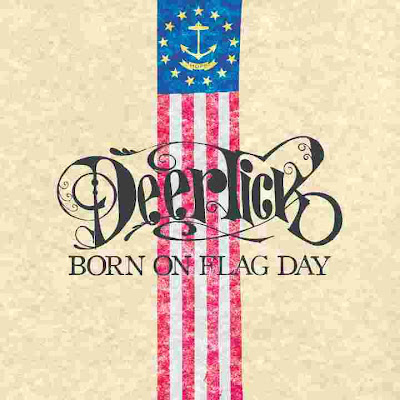 Truly sad news about Harry Kalas. During the '93 world series we muted the national TV broadcast so we could listen to Harry on the local radio instead. Certainly the voice of Philadelphia sports, he'll be missed indeed.

Onwards and upwards though. Yesterday, we received the new mp3 "Easy" from Deer Tick's up-coming record Born on Flag Day dropping June 23rd on Partisan. "Easy" incorperates brooding guitar lines and layered melodies recalling more Lucero than Townes Van Zandt, which is just fine. John J. McCauley III can deliver raspy, vocal growls with the same authenticity as Ben Nichols, and could probably do well in a drinking contest against him as well (advantage Nichols on that one though.) For all the growls, guitars and booze, McCauley can write a damn fine hook. "Easy" is a pure and simple rock song. Sometimes that's all it takes folks. We love it. Above is round two of the cover art, so, if you're keeping track at home -- that's four album covers for two Deer Tick records.

Dictated but not read by StarkNY at 6:32 AM