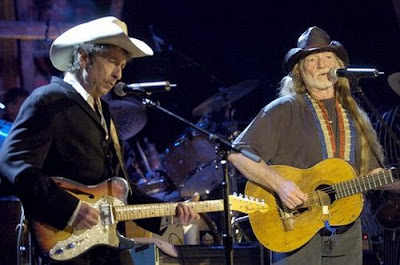 Photo Credit: http://farm4.static.flickr.com/3247/2368051286_524d7c7fce.jpg
Rolling Stone just gave Dylan's Together Through Life a four star review. You know they would have gone five, but they would have caught too much heat from us bloggers. Plus, it would just be too easy to give Dylan five stars. He's Bob Dylan. We know. We love him.

Dylan, Shotgun Willie AND the original cougar, John Mellencamp are teaming up to take us all out to a ball game this summer, with a tour of the nations' most famous (or not famous) baseball stadiums. Sure, the sound will probably be shit in most of the venues, but deal with it. See tour dates and venues after the jump.

On a side note, we wish we could catch Tinariwen at Le Passion Rouge this evening, but we have the all important Pomp & Circumstance party to attend. Gotta represent.