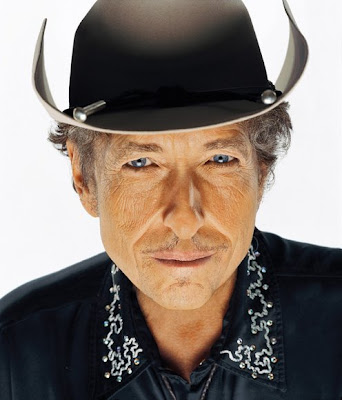 We're not really sure where this came from, but Bob Dylan will have a record of 10 original songs coming out in late April on Columbia. Dylan's yet untitled effort comes quickly on the back of his truly amazing Tell Tale Signs --the eighth installment of the Bootleg Series. This will be his first collection of new material since 2006's Modern Times. According to Rolling Stone's description, the record sounds damn fine, and right up our alley. Some great surprise news for a Thursday.

The disc has the live-in-the-studio feel of Dylan's last two studio records, 2001's Love and Theft and 2006's Modern Times, but with a seductive border-cafe feel (courtesy of the accordion on every track) and an emphasis on struggling-love songs. The effect — in the opening shuffle, "Beyond Here Lies Nothin'," the Texas-dancehall jump of "If You Ever Go to Houston" and the waltz "This Dream of You" — is a gnarly turn on early-1970s records like New Morning and Planet Waves.

Dictated but not read by StarkNY at 1:45 PM