Saying Goodbye to the Hold Steady 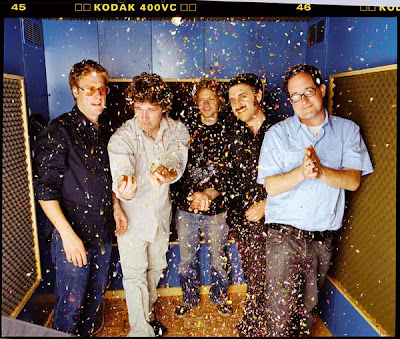 People don't use the term "selling out" much anymore. In this recession era economy, the music- powers-that-be often turn a blind eye to the Bud Light commercials, Grey's Anatomy placements, and J.C. Penny campaigns that only a few years ago would've resulted in critical ruin for musicians who held creditability among the rock elite. Now, whenever there is an opportunity to make some money, the industry encourages bands to take it, in hopes that the new money will allow them to make maybe one more record. "Take what you can, when you can, while you can. And you gotta take it now." Jimmy Fallon said that.

Yet, the Hold Steady have "taken it" one too many times for me this year. They're supporting the Counting Crows and Dave Matthews Band on their upcoming tour, as well as gracing Rachel Ray's stage at this year's SXSW. Say what you want about money or fan bases. I'm taking this moment to say goodbye to the Hold Steady. Their last show found me in the midst of way too many, well, DMB fans. Call me elitist, but that matters. Something was lost that night. I saw them no longer as that hard working band, out to do good. They became contrived, cliched rock stars dialing it in, putting on the show everyone expected them to put on. Maybe they were always that way. Maybe not. I'll always love their previous records, but I can't really see myself buying any more, or going to any more shows. It's sad really, because I honestly did love them for a time. They've chosen a different path, and that's ok I guess. Sometimes you just gotta go with whoever is gonna pay you the highest.
Dictated but not read by StarkNY at 10:16 AM

what band wouldn't want to have the kind of exposure that comes with opening up for DMB?!? I'll gladly "sell out" to get more fans...

What happened to the good old days when Bob Dylan would never touch a pepsi commercial and Bruce Springsteen would never go near a Wallmart.

I never bought their records anyway. So, yeah.

I can't listen to them regardless